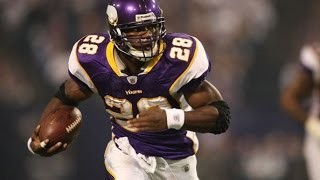 New England Patriots To Meet With Adrian Peterson On Monday


New England Patriots To Meet With Adrian Peterson On Monday

According to NFL Network Insider Ian Rapoport, sources say that free agent running back Adrian Peterson is set to meet with the New England Patriots on Monday, ESPN reports. Adrian Peterson last played for the Minnesota Vikings during the 2016-2017 NFL season.

Adrian Peterson’s scheduled visit with the New England Patriots is his second free-agent visit this off-season. Adrian Peterson has already visited the Seattle Seahawks last month, as reported by the NFL News.

Adrian Peterson, 32, has been named to seven All-Pro teams. During Adrian Peterson’s 10 year career in the NFL, he has compiled 11,747 rushing yards and 97 rushing touchdowns, the most by any player in the NFL over the past ten years.

Questions still remain as to whether Adrian Peterson can still play at a high level given his age. There’s also the fact that how will Adrian Peterson fit in the New England Patriots’ offense.