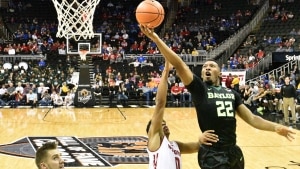 
KANSAS CITY, Mo. — For the first time ever in Division I men’s college basketball, teams competing at the 2018 Hall of Fame Classic Powered by ShotTracker will have access to ShotTracker’s live stats and analytics on the benches during game play.

The NCAA has granted a waiver that will allow coaches for Missouri State, Nebraska, Texas Tech and USC to utilize the ShotTracker Team app on iPads for coaching purposes during the Hall of Fame Classic championship round games.

The use of technology on team benches during competition is currently not permitted by NCAA men’s basketball playing rules. The NCAA waiver will make the Hall of Fame Classic the first set of games in Division I history where coaches will have access to real-time advanced analytics on a handheld device during live competition.

“We’re thrilled to bring ShotTracker’s game-enhancing technology to NCAA Division I games for the first time at the Hall of Fame Classic,” said Davyeon Ross, co-founder and COO of ShotTracker. “ShotTracker is proud to drive this next stage of growth in college basketball, and we are excited to take this major step in bringing the extraordinary power of live analytics to the NCAA level. The power and applications of this technology will have a significant impact on college basketball.”

RELATED: What you need to know about flexibility for going pro and getting a degree

ShotTracker is a revolutionary sensor-based system that automatically captures and delivers live stats and analytics for an entire team in real-time. All four teams will be equipped with an iPad for use at the Hall of Fame Classic, along with a dedicated ShotTracker team liaison to educate coaches on how to best utilize the collected data. Following the games, event operators will compile feedback from coaches for the NCAA as it continues to evaluate the use of bench technology.

Each student-athlete will wear a ShotTracker sensor, and games will be played with a ShotTracker-enabled Wilson basketball. ShotTracker teamed up with Wilson Sporting Goods – the official ball of the Hall of Fame Classic and one of the industry leaders in advanced connected basketball technologies – to ensure an embedded smart sensor will be undetectable in game play.

“The NCAA’s approval of ShotTracker technology on the bench at the Hall of Fame Classic is a huge stride forward for the sport of basketball,” said David Stern, NBA Commissioner Emeritus. “For the first time, Division I coaches will have unprecedented access to real-time data and powerful intel via ShotTracker’s app throughout the duration of each game. The Hall of Fame Classic is the perfect stage to display the possibilities of this technology at the next level.”

Via the ShotTracker Team and Fan apps, ShotTracker’s technology will provide a wide array of resources to coaches, players and fans alike, including interactive shot charts, real-time lineup efficiencies and possession-based statistics. ShotTracker will also offer live analytics integration into Hall of Fame Classic telecasts on the ESPN networks, creating a never-before-seen experience for viewers at home.

RELATED: Here’s what the new college basketball reforms mean for the sport

The event’s semifinals — pitting Missouri State against Nebraska and Texas Tech versus USC — take place on Nov. 19 at Sprint Center in Kansas City, followed by the consolation and championship matchups on Nov. 20.

The Hall of Fame Classic Powered by ShotTracker is part of National Collegiate Basketball Hall of Fame Weekend in Kansas City, which also includes the Hall of Fame Class of 2018 induction celebration on Nov. 18. Tickets and credential applications for both events are available now at halloffameweekend.com.

About the Hall of Fame Classic