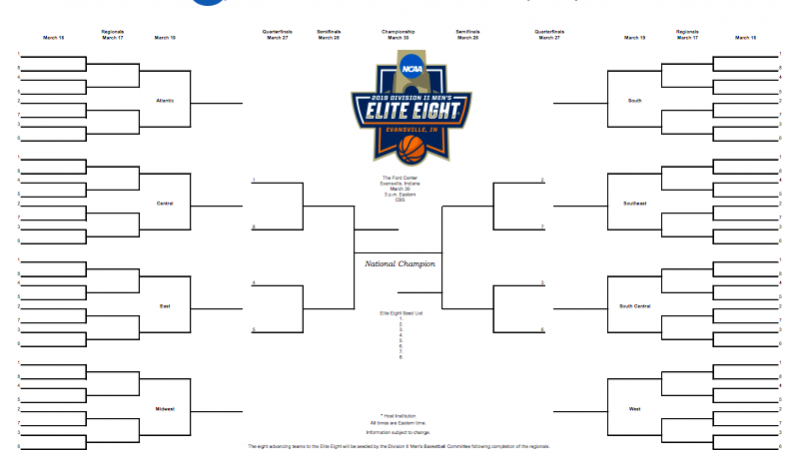 For now, the bracket is blank, but NCAA DII’s version of Selection Sunday is almost here. The 64-team tournament bracket will be revealed Sunday, March 10, at 10:30 p.m. ET right here on NCAA.com.

Here is some more information on the 2019 DII men’s basketball championship you should know.

The DII men’s basketball championship starts with 64 teams. Each of the 24 conference champions earns an automatic qualifying bid with the selection committee picking the remaining 40 teams (more on that process in a bit). The field is broken up by region, with eight, eight-team regions beginning mini three-day tournaments beginning March 16 at the location of the No. 1-seed from each region.

How are the regions made up?

Now, how are those other 40 teams selected, you ask? First and foremost, you need to have a Division II won-lost record of .500 or better having competed against at least 22 DII men’s basketball programs. If you meet that criteria, the committee looks at:

Once the field is set, play begins. The winner of each region heads to the Elite Eight. Those final teams standing are reseeded and play moves to Evansville, Indiana. There, all quarterfinals, semifinals, and championship game action will be played to conclude the 2019 season.

WHAT TO KNOW ABOUT 2019: Standout freshman | Stat leaders | Undefeated teams

Ferris State entered the 2018-19 season defending champions finishing 38-1 and atop all of DII men’s basketball. The Bulldogs defeated Northern State in a memorable 71-69 thriller from Sioux Falls, South Dakota. They need seven more to catch Kentucky Wesleyan who owns the most DII championships in the 64-year history of the event.

Here’s a complete list of the programs which have won the most DII men’s basketball titles and a list of every championship game in DII history.