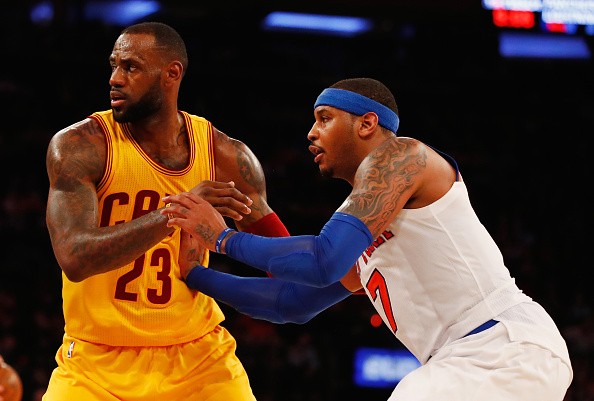 Carmelo Anthony #7 of the New York Knicks and LeBron James #23 of the Cleveland Cavaliers battle for position during their game at Madison Square Garden on March 26, 2016 in New York City. (Photo : Al Bello/Getty Images)

LeBron James has made it clear last week that the Cleveland Cavaliers need a playmaker to increase their chances of winning back-to-back NBA titles. However, it seems like the Cavs want more than a point guard since NBA trade rumors imply that the defending champs want to form their own “Big 4”.

The Cavaliers struggled in January as they only managed to win seven out of their fifteen games last month. James made it clear that he wants a point guard and NBA trade rumors have linked the Cavs to players such as Jameer Nelson, Deron Williams, Mario Chalmers, Lance Stephenson, Kirk Hinrich and T.J. McConnell.

However, the Cavaliers are looking at the bigger picture. They want to build their own “Big 4” to battle the Golden State Warriors quartet of Stephen Curry, Kevin Durant, Klay Thompson and Draymond Green, per Sporting News.

The defending champs are short of one more All-Star with James, Kevin Love and Kyrie Irving but they could look to trade for Carmelo Anthony of the New York Knicks. According to ESPN, the Knicks are still interested in trading Anthony for Love despite the Cavs turning down the offer.

The report noted that the Cavs are interested in bringing Anthony to Cleveland to form half of the banana boat crew. However, they want to do it without trading Love, who is having his best season in a Cavaliers uniform.

It should be noted that Anthony has to waive his no-trade clause before a trade gets approved. The Knicks are desperate to move on from the nine-time All-Star and they might pull the trigger despite a possible lowball offer from the Cavs.

NBA trade rumors have noted that Anthony is willing to waive his no-trade clause if he gets traded to teams like the Cavaliers, Los Angeles Clippers and Boston Celtics. The 32-year-old superstar is looking to win his first championship so a trade to a contender makes sense for him.

More importantly, Anthony will make the Cavaliers the favorite to win the NBA championship. He eases the scoring pressure off of James and Irving while also providing backup for Love, who missed a handful of games due to a bad injury.

Nevertheless, these are just NBA trade rumors at the moment and nothing has been finalized. The NBA trade deadline is on February 23.