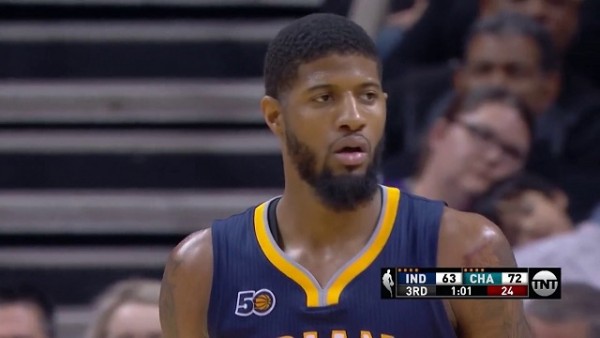 NBA Rumors: Paul George Not A Good Fit With The Los Angeles Lakers?


NBA Rumors: Paul George Not A Good Fit With The Los Angeles Lakers?

Paul George of the Indiana Pacers looks on during a game against the Charlotte Hornets. (Photo : NBAHighlightsDaily/YouTube)

Paul George is heading into the offseason with a lot of questions regarding his future with the Indian Pacers. He has been linked to the Los Angeles Lakers but one basketball analyst believes that George is a not really a great fit in Hollywood.

The Pacers are coming off a competitive but disappointing sweep in the first round of the 2017 NBA playoffs at the hands of the Cleveland Cavaliers. Paul George had a good series but the Pacers failed to capitalize on the uninspiring and inconsistent Cleveland defense.

In what could be his final game with the Pacers last Sunday, Paul George struggled with his shot and went just 5-for-21 in the field. He finished with a stat line of 15 points, seven boards, six assists, four steals and one block, per NBA.com.

The Pacers have to make a decision about their superstar forward who is set to become a free agent at the end of the 2017-18 NBA season. He has been open about his desire to test the market and possibly sign with his hometown Lakers.

The Lakers are in need of a new superstar with D’Angelo Russell, Julius Randle and Brandon Ingram still waiting for their break out year. The team has new front office executives headed by Magic Johnson and Rob Pelinka. Johnson, in particular, has hinted that he might be interested in acquiring Paul George this offseason.

However, Mitch Lawrence of Sporting News believes the Lakers should stay away from Paul George. He noted that “PG13” has a tendency to put blame on his teammates and he’s known for not being a good leader. He added that it won’t be good for the development of their very young core.

“Johnson will be making a franchise-altering mistake for years to come if he goes all-in on George, who has shown he’s a poor leader who often alienates teammates,” Lawrence said.

Lawrence pointed out that Paul George is better suited to play with the Boston Celtics where veterans like Isaiah Thomas and Al Horford can keep George in check regarding his comments about the team his playing for. Nevertheless, it would be a very interesting summer with the Lakers and Pacers ushering a new era.