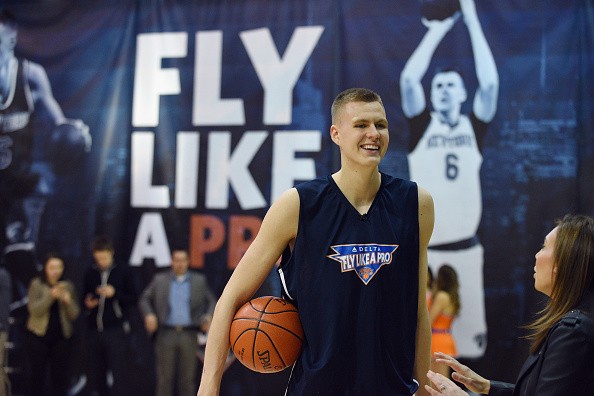 The New York Knicks are the most dysfunctional team in the NBA at the moment. Kristaps Porzingis, who is the future of the franchise, is unhappy with the Knicks and team president Phil Jackson. Does Porzingis want out of New York?

According to Adrian Wojnarowski of The Vertical, Kristaps Porzingis is planning to spend his entire summer and offseason in his native Latvia, far away from the messy situation in New York. It’s the second move by Porzingis that should have Knicks fans concerned.

The 21-year-old Latvian superstar skipped the team’s exit interviews last week because he was unhappy with the Knicks. Phil Jackson did not give the Knicks any favors when he publicly called out Carmelo Anthony to waive his no-trade clause because “he’s better off somewhere else”.

The comments made by Jackson was not well-received by Kristaps Porzingis and many of the Knicks’ players. Even the NBA Players Association was offended by how Jackson showed unprofessionalism during his press conference.

Wojnarowski also pointed out that Kristaps Porzingis and several of his teammates wants no part of the Knicks’ plans this summer as a form of protest against the team. Jackson wants the team to meet, discuss and learn the triangle offense more thoroughly this summer at the team’s training facility in suburban New York.

Kristaps Porzingis is the present and future of the Knicks but he is sending a clear message to the team, Phil Jackson and ownership that he is unhappy. He is the franchise’s best hope to end a long drought of success and he can’t lead the team if the Knicks are this dysfunctional.

According to Marc Berman of the New York Post, Kristaps Porzingis is still in New York and he is expected to meet with Phil Jackson before going home to Latvia to spend his offseason. He spent Easter Sunday in New York with his brother, Janis, at the West Side Highway riding bicycles.