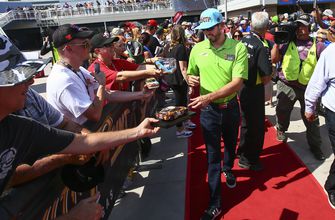 NASCAR's playoffs begin at Las Vegas with SHR out front

Bowyer won his first pole 12 years to the day of his last pole-winning run to earn a spot at the front of the field. He’s ranked at the bottom of the 16-driver playoff field.

Starting behind Bowyer are teammates Daniel Suarez, Kevin Harvick and Aric Almirola. Suarez is not eligible for the playoffs, while Harvick is considered among the favorites.

The surprise burst of speed from the SHR cars left the other contenders wondering if those Fords were set up just for qualifying, and if they’ll fade after 20 or so laps.

Temperatures are expected to hit a Sunday high of 100 degrees when the race begins, and NASCAR this year moved the start later in the day in an effort to protect fans from the smoldering heat.