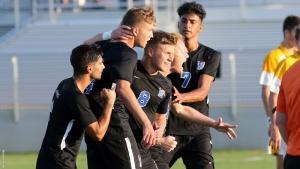 
CINCINNATI, Ohio – In its first true away game of the year, the Memphis men’s soccer team emerges victorious after a 3-2 double-overtime win over No. 10/11 Xavier.

Senior forward Sam Ashton tallied a natural hat trick by scoring all three goals for the Tigers. None was more important than his score in the second overtime period, clinching the match in the 109th minute.

FINAL | SAM ASHTON!! He completes the hat trick in the second overtime to give the Tigers the win over #11 Xavier!#GoTigersGo #NattyHatty pic.twitter.com/9DVW81UVD5

“We came in with the mentality of just needing to put in a complete performance,” Head coach Richard Mulrooney said after the win. “We went in with a game plan of being consistent for the whole match, and it paid off for us.”

The first half was barely under way when an Xavier player was injured on an attempted header in Memphis’ defensive box. The Musketeers were awarded a PK for the incident, which was put in the net in the 14th minute.

UPSETS GALORE: Virignia knocked off No. 2 Duke earlier this week

Despite the early deficit, the Tigers stayed aggressive, pressuring the Xavier defense with drives into the Memphis offensive third of the field. Later in the 14th minute, Chris Mikus and Artur De Luca each got looks at shots, but neither were able to tie the score, with Mikus’ being blocked by a defender and De Luca’s heading wide.

Play was back and forth for Memphis and the nationally ranked Xavier squad, as both teams were able to get deep into enemy territory throughout the half. Defense ruled the half, however, as neither team was able to put anything else in the net in the first half. Xavier outshot the Tigers 6-5 through the first 45 minutes of action.

The second half opened with a quick drive from the Tigers, which resulted in a penalty in the box against Xavier. Ashton drew the foul in the penalty area before finishing his second PK of the season.

Xavier wasted little time reclaiming the lead, putting in a free kick from steps outside of the box just 75 seconds later.

The Musketeers had the momentum at that point, being the aggressors and controlling possession. Memphis plodded on though, countering Xavier’s offense with a stout defense and runs of its own.

Memphis, playing from behind again, found its opportunity to equalize in the 69th minute. A ball played through the box was redirected back into danger by Mikus, who finished the night with a pair of assists. Ashton, who scored the first goal of the evening for Memphis, was there to head it in, tying the game once more.

“I told the guys that since we’ve come this far, let’s go a little farther,” Mulrooney said of playing from behind. “I thought our defensive line was excellent tonight, and we worked both sides of the ball.”

TOP 25: Check out the rest of this week’s coaches poll

The first overtime period was tense but largely uneventful. Xavier presented the best chance to score with a deep throw in, but the attack was stopped when the Tigers drew the Musketeers into an offsides call.

Memphis controlled the momentum into the second overtime period, seemingly more confident than its nationally ranked opponent. After making substitutions halfway through the period, Ashton completed his first career hat trick, scoring his third goal of the night in the 109th minute, finishing off the comeback win for Memphis.

“Sam’s been on fire all season. He had help getting those three goals, but he’s the one that put them in the net,” Mulrooney said of Ashton. “It takes ice in your veins to take PKs, and obviously he hit it. He’s firing on all cylinders right now.”

The hat trick marked the first for a Memphis Tiger since Raul Gonzalez scored thrice against Central Arkansas in 2015. The victory against the nationally ranked Musketeers was the highest ranked opponent to fall to the Tigers since 2011, when Memphis defeated No. 9 UCF.

Memphis wraps up a four-game slate away from home next Tuesday with a match against Belmont. First touch in Nashville, Tenn., is set for 7 p.m.

“Our thoughts and prayers go out to Felix Boe-Tangen. Obviously, you never want to see an injury in a game,” Mulrooney said. “Our hearts go out to him and his family, along with the entire Xavier soccer family. We’re wishing him a speedy and complete recovery.”