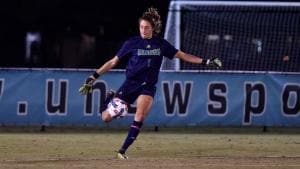 And then there’s the super rare group of players, the ones who get to play in the World Cup while they’re still enrolled in college.

That will happen for 11 NCAA student-athletes this summer as players from schools across the country were called up to represent their national team on soccer’s biggest stage in Paris, France.

2019 NWSL DRAFT: Here’s a look at who’s going into the league

Australia, Canada, Jamaica, New Zealand and Thailand all included players from the collegiate ranks on their 23-player rosters for the Women’s World Cup, which begins Friday, June 7.

Before these players start making history for their countries, let’s get to know a bit about them.

Micah has been a starter for the Bruins for three seasons and is fourth all-time in Bruins’ history in career wins (46), saves (199) and clean sheets (26). As a sophomore in 2017, she led the nation in goalkeeper minutes played (2,268) and helped the Bruins reach the College Cup final by coming up big in a penalty shootout against Duke. Micah received her first call-up to the Australian national team in 2017.

Grosso has 16 caps for Canada since making her senior team debut in 2017. As a freshman at Texas, she made an impact right away, earning co-Big 12 Freshman of the Year honors in 2018. She missed a chunk of her rookie campaign with the Longhorns due to national team duties, but still scored a pair of goals in 13 appearances and helped the Longhorns reach the NCAA tournament.

This stage is nothing new for Fleming. She made her national team debut at age 15 and was called up to Canada’s national team for the 2015 World Cup. She also played for her country at the 2016 Olympics, where Canada earned a bronze medal. Since 2013, she’s been capped 65 times by Canada and has scored eight goals.

At UCLA, she’s twice been named as an All-American and was a finalist for the Hermann Trophy in 2017, as a sophomore. In 53 appearances for the Bruins, Fleming has scored 22 goals and assisted on 18 others.

That 1⃣st half goal from Jessie Fleming.

After being named SEC Freshman of the Year in 2017, Rose saw limited action for the Gators as a sophomore due to her national team obligations. Still, she was able to tally a pair of goals and an assist in 10 appearances. Since 2015, Rose has made 39 appearances and scored eight goals for the Canadian national team, even scoring once against Brazil in the 2016 Olympics. She will join three former Gators in the World Cup.

Carle has been making highlights for Canada since scoring her first goal for the national team in qualifying stages for the 2016 Olympics. She speaks three different languages — English, French and Spanish — and has a knack for finding the back of the net. At Florida State, she mostly plays as a defender, but scored her lone goal of the 2018 college season in the semifinals of the College Cup, helping lead the Seminoles to a 2-0 win over Stanford. FSU went on to beat North Carolina in the final. The versatile Carle contributed to an FSU defense that shutout 16 opponents last season. Carle has tallied two goals and five assists in two seasons with the Seminoles and has one goal and one assist in 13 appearances with Canada.

Schneider was born and raised in New Jersey, but her grandparents are from Jamaica and her mother was born there, making her eligible to play for the Reggae Girlz. Since 2018, she’s made 10 appearances with Jamaica’s national team. At UNCW, she’s played in 27 games and posted four clean sheets and a 0.723 save percentage. Schneider impressed for Jamaica in the 2018 CONCACAF Women’s Championship, helping the Reggae Girlz notch a 1-0 upset of Costa Rica on their way to a third-place finish, which qualified them for the World Cup.

A two-time All-Big Ten selection, Swaby has been a mainstay on the Rutgers’ defense since stepping foot on campus, starting in 55 of the 56 matches she’s played in there. Swaby has one goal and one assist for the Scarlet Knights over her three seasons there and has helped Rutgers reach the NCAA tournament in each of those seasons. Swaby has made nine appearances for the Reggae Girlz since making her debut in 2018.

LOOKING BACK: How Florida State beat UNC for the 2018 College Cup

Plummer made her national team debut with Jamaica in 2015 and since has scored two goals on the international stage, finding the back of the net twice in 2018, in CONCACAF competitions against Guadeloupe and Bermuda. She began her collegiate career at NAIA Southeastern University, but transferred into UCF last season, where she had a goal and one assist in nine appearances for the Golden Knights.

Blackwood will be the lone current Division II NCAA athlete playing in this World Cup. A native of Kingston, Jamaica, she’s made 13 appearances for her national team since 2018, scoring three goals. While she’s listed as a defender, she’s shown the ability to find the back of the net, scoring 13 goals and assisting on eight others during her two seasons with the Argonauts at West Florida.

We were lucky enough to catch up with Senior Deneisha Blackwood before she left to join Jamaica for the World Cup. From everyone @UWF, we wish you good luck! Be sure to keep up with us for updates from Deneisha herself as she posts videos about her World Cup journey! #GoArgos pic.twitter.com/Rh7S8In49W

A 22-year-old from Auckland, New Zealand, Cleverley first made an appearance for her national team in 2014. The following year, she made the roster for the World Cup in Canada. Since joining Cal in 2017, she’s been a mainstay in the lineup for the Golden Bears, starting in 20 of the 29 games she’s appeared in with a goal and two assists to her name. Cal missed the NCAA tournament last season, but Cleverley helped them make it in 2017. Cleverly will join recent Cal graduate Miranda Nild (Thailand) and former Golden Bear forward Alex Morgan (U.S.) at the World Cup.

This will be just the second time that Sornpao has been called into Thailand’s senior national team, joining the squad for the Cyprus Cup this past February. There, she made her debut in a match against Italy. As a sophomore at Kennesaw State, Sornpao broke the school’s single-season save record, stopping 94 shots. This past season, she helped the Owls go 12-6-1 and appear in the ASUN championship game.

In addition to these 10 players, Uchenna Kanu of NAIA Southeastern University will feature for Nigeria at the World Cup.