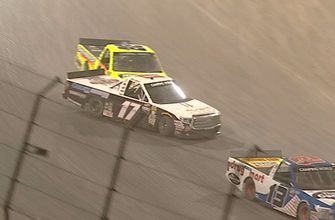 VINCE WELCH: The 17 of Tyler Dippel, the 18 year old, connecting with the 88 of Matt Crafton. They brought out the yellow, and during this caution Ryan Newman has come to pit road. Crafton has left rear damage as well. So let’s take a look at it as they get into turn one. Crafton on the inside, and–

MICHAEL WALTRIP: Just tried to get– and you saw Ryan Newman come through there late and caught his right front on Crafton. And you could tell that Dippel wasn’t very thrilled with Matt Crafton, and he ran up beside him and showed his displeasure. But that’s just hard racing. Matt certainly didn’t expect Dippel to come down so much and just had contact.

KYLE LARSON: I mean Dippel looks like he just hangs a left on him and not quite clear low and gets himself in trouble to me.

VINCE WELCH: Dippel was running fourth at the time. We mentioned just 18 years old, the youngest to win a big block modified race up in the Northeast.

VINCE WELCH: So much for our camera.

MICHAEL WALTRIP: Oh, man, what did we pay for that? That’s got to be expensive.