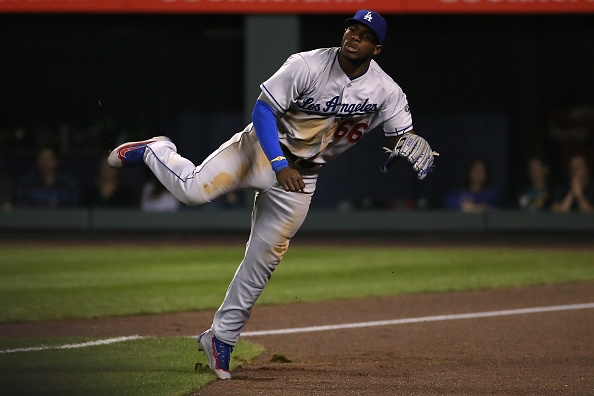 The Dodgers unorthodox behavior is no secret, but even when he’s off the diamond he likes to have a good time. That good time, apparently, includes crashing high school proms, though “crashing” may not be the operative word considering he appeared to instantly become the life of the party.

Following the Dodgers 4-1 victory over the Rockies on Saturday, Puig returned to his Denver-area hotel and made quick pit stop. The Dodgers star surprised attendees at the Chatfield Senior High School prom and gladly took photos with the prom goers.

Puig, 25, shared multiple photos on social media of him at the prom enjoying himself, including one with a bunch of students and a caption in Spanish that translates to, “After we won, I came to surprise some students at their prom dance.”

It’s fine for Puig to have some fun, especially considering his torrid start to the season. Puig owns a .294/.368/.441 slash line through 19 games with a homer and seven RBIs, though he was 1-for-5 with two strikeouts in the game before he appeared at the prom.

Puig’s surprise appearance came just a day after he turned heads by throwing an absolute bullet to third base to get Rockies’ rookie phenom Trevor Story out. In classic eccentric Puig fashion, the outfielder posted about the throw and his penchant for missing the cut-off man on Twitter:

The Dodgers (12-7) currently hold first place in the NL West as they eye their fourth straight division crown under new manager Dave Roberts, who already has high praise for Puig.

“I just put my fan cap on and just appreciate it,” Roberts said after Puig’s throw, according to Yahoo Sports. “I’m really starting to get it with Yasiel. Every time he gets on the baseball field, something special can happen. That’s at the top of the list.”