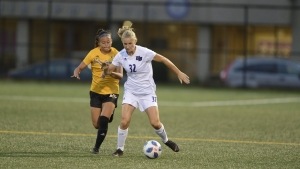 Live updates and highlights from the DII women's soccer championship

Welcome to the semifinals of the 2018 NCAA DII women’s soccer championship from the Highmark Stadium in Pittsburgh, Pennsylvania. This is your spot for live updates, highlights, scores, and analysis throughout the entire weekend.

Four teams battled through the bracket and remain alive in the hunt for the 2018 title. Stay right here from opening kickoff to the final whistle for live updates, highlights, and analysis from the DII women’s soccer championship.

The DII women’s soccer championship semifinals will see four new faces in 2018. While none of the teams heading to Pittsburgh, Pennsylvania for the DII festival were amongst the final four teams last year, there is a long championship tradition amongst a couple of the teams still standing.

Grand Valley State returns to the semifinals once again as the hottest team in DII women’s soccer. The Lakers are unbeaten in 25 games in 2018, racking up 24 wins and playing to a draw way back on Sept. 16 against Ashland. This team is clicking offensively, sweeping through the GLIAC tournament by outscoring their opponents 13-1 before pouring on 20 goals through the first four games of the NCAA tournament.

They knocked off the reigning national champion Central Missouri Jennies 6-1 in the quarterfinals, ending the Jennies title defense and avenging their own quarterfinals loss to Central Missouri last year. The Lakers were reseeded as the No. 1 in Pittsburgh and deservedly so. No program has won more DII women’s soccer titles than the Lakers, most recently pulling off a three-peat from 2013-15.

tra•di•tion: a continuing pattern of culture beliefs or practices.

The Lakers will take on the lowest seed to advance to the national semifinals, the Lee Flames. Lee was knocked out of the Gulf South Conference tournament but has since won four straight, emerging from the South Region as the No. 4 seed. The Flames stunned the Southeast’s No. 1 seed Columbus State 1-0 in the quarterfinals, becoming the first team to hand the Cougars a loss in 2018. Keeper Taylor Green posted the shutout against the No. 2 scoring offense in DII women’s soccer, the very same Cougars squad that scored seven goals through their first two games of the tournament.

For the second time in the past four seasons, the Bridgeport Purple Knights are heading to the national semifinals. They are a hot team as well, coming to Pittsburgh amid a seven-game winning streak. Bridgeport entered the NCAA tournament the No. 2 seed in the East and took down Stonehill, Saint Rose, and LIU Post in tightly-contested matches. Maegen Doyle, the No. 2 goal scorer in DII women’s soccer, started the second half of the quarterfinals off with her 26th goal of the season, putting the game out of reach and leading the Purple Knights to the upset over No. 1-seeded Bloomsburg. This has been quite the bounce-back season for Bridgeport, after finishing with a disappointing 8-8-1 record last year.

The Purple Knights will face off against the West’s No. 1 seeded UC San Diego. The Tritons are no strangers to the spotlight, winning the national championship in back-to-back years. But that was back in 2000 and 2001, and UC San Diego is in its best position since then to take home title No. 3.

The Tritons reached No. 1 earlier this season and hit a few speed bumps along the way. They lost their season finale to a very good Chico State team but have righted the ship since. UC San Diego swept its way through the CCAA tournament and now the NCAA tournament thus far. The Tritons played tight matches in their first two games, taking Western Washington to penalty kicks, but left little doubt they were semifinals-bound with a dominant 5-0 quarterfinals victory over West Texas A&M.