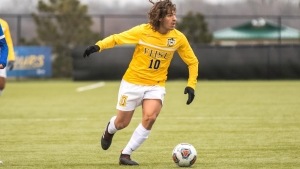 Live updates and highlights from the DII men's soccer championship

Welcome to the semifinals of the 2018 NCAA DII men’s soccer championship from the Highmark Stadium in Pittsburgh, Pennsylvania. This is your spot for live updates, highlights, scores, and analysis throughout the entire weekend.

Just four teams remain in the hunt, each one looking for its first national title in program history. Stay right here from opening kickoff to the final whistle for live updates, highlights, and analysis from the DII men’s soccer championship.

Let’s take a quick look at how each of the four teams survived and made it to the semifinals.

First up is West Chester. Last season was a memorable one for the Golden Rams, tying the program-record with 14 wins and winning their first NCAA postseason match in 50 years. The road for West Chester this year was no easier, needing to go through two No. 1 seeds to get here. After defeating Notre Dame (OH) in their first game, the Golden Rams ended Charleston (WV)’s title defense in a 1-0 shutout. They continued their defensive dominance, shutting out Adelphi 2-0. West Chester now sits at 15 wins and is rewarded with the program’s first trip to the DII semifinals.

Next up for the Golden Rams is Cal Poly Pomona. The Broncos played more tournament matches than any other opponent to get to Pittsburgh. Luckily a near-two-week layoff should allow the Broncos to rest up.

The No. 5 seed out of the West not only had to defeat a higher seed in every match to reach the semifinals, but they also did so without allowing a goal. What’s more remarkable is that each of the four shutouts was against a top 15 scoring offense in DII men’s soccer. First, they blanked Fresno Pacific — the No. 2 scoring offense — 3-0 before shutting out the No. 3 scoring offense in Simon Fraser. The Broncos next victims were Azusa Pacific (No. 13) and West Texas A&M (No. 5). That’s not a bad resume at all. For the second consecutive year, Cal Poly Pomona will be the lowest seed to reach the national semifinals. Last season, the Broncos made it as the sixth-seed and lost to eventual national champion Charleston.

THE BRONCOS ARE OFF TO PITTSBURGH IN 2 WEEKS! THEY DEFEATED WEST TEXAS A&M 2-0 IN THE NCAA QUARTERFINALS! pic.twitter.com/gLN1nu79bT

Speaking of high-scoring offenses, Fort Hays State only needed to play two games to reach the semifinals. The Tigers are the top scoring offense in the land, averaging 3.56 goals per game, tied with West Texas A&M with 64 goals on the season. Neither match was an easy one, despite the Tigers making it look that way. They won both matches by two goals, defeating Northeastern State 3-1 and then Ohio Valley 2-0. The Tigers will also be making their debut in the national semifinals.

67’ | Fran threads the needle 👉🏼 to Kirkham who sends a cross to the backpost 👉🏼 where Luca sends a low-strike into the bottom-left corner to convert the second goal of the day for the Bucs!!

Fort Hays State will face the Barry Bucs, fresh off a 2-1 victory over Lander. It will be the first time the two have faced each other, as Barry looks to return to its first championship game 2000. The Bucs exploded for four goals in their tournament opener, downing Spring Hill 4-1. Next up, Barry took its Sunshine State Conference nemesis Lynn to penalty kicks, moving on and ending the run of a Fighting Knights team that has been semifinals regulars of late.

The stage is set. There are only three games left in the DII men’s soccer season and for the first time in one of their respective program histories, a new team will hoist the championship trophy. With no top 10 teams remaining and just one No. 1 seed left, the 2018 championship trophy is anyone’s for the taking.