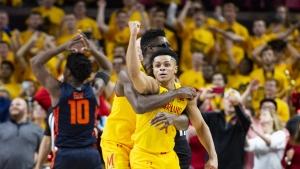 Cowan led Maryland with 20 points against the Fighting Illini, including a game-tying 3-pointer and a free throw that clinched the victory for the Terps. The Maryland guard also notched seven boards, six assists and a steal at the end of the game that helped the Terps go ahead late.

.@AnthonyCowanJr with the game on the line = dangerous

“You gotta love it. As a competitor that’s the type of moments that you live for,” Cowan told Andy Katz on the latest episode of the March Madness 365 podcast. “When we need one more shot to win the game, I live for those type of moments.”

The Terps currently sit at No. 4 in the nation and are one of eight teams in college basketball that are still undefeated.

Compared to last year’s squad, a team that was loaded with talent like center and now-Atlanta Hawk Bruno Fernando, Cowan told Katz he feels this team looks even more like a national title contender than last year’s.

“We’re a little older now. Sophomores are now juniors, our freshmen are now sophomores. I think a year under your belt, that really does a lot for you,” Cowan said. “Also, our freshmen stepped up. We brought in a lot of freshmen that’s going to give us toughness to the team. When you put all those together you have a very good team, a recipe for success.”

Last season, Maryland fell to LSU in the second round of the 2019 NCAA tournament. The 69-67 loss is still fresh in the mind of Cowan and the Terps, as a trip to the 2019 sweet sixteen would have put them right down the road from College Park with both the sweet sixteen and elite eight being hosted in Washington D.C.

“We knew what was at stake to be able to play in the sweet sixteen, especially in our backyard,” Cowan said. “Who knows where that could’ve took us, nobody will ever know. Now, all we gotta do is just keep moving forward.”

Getting to the second weekend of the tournament is now the floor for Cowan and company, as the No. 4 Terrapins are starting to look not only like contenders for the Big Ten crown but also for the ultimate prize — the national championship.

Maryland will get their next test on Tuesday night when they visit the Nittany Lions at Penn State. Tip-off is at 7 p.m. ET.

Cowan’s interview with Katz begins at about the 32:00 mark and covers all of these topics and more. This week’s edition of the March Madness 365 podcast also features interviews with analyst Robbie Hummel and NBA sharpshooter Klay Thompson.

Share. Twitter Facebook Google+ Pinterest LinkedIn Tumblr Email
Previous ArticleNo. 4 Oklahoma and No. 1 LSU square off in the CFP semifinals
Next Article Montana State defeats Albany, 47-21, in the second round of the FCS playoff