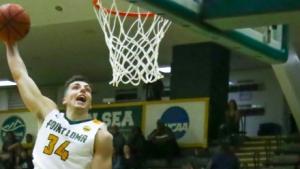 Let’s take a look at some standout performers. For the final time in the 2019 season, here’s your starting five based solely on stats from the DII Men’s Elite Eight.

LOOK BACK: Memorable moments from a historic Elite Eight | Recap

What’s not to say about the tournament’s Most Outstanding Player. Hudgins, a freshman, started the quarterfinals game 0-for-6, but with fellow starting freshman guard Diego Bernard on the bench with injury and All-American Joey Witthus unable to finish out the game with an injury of his own, Hudgins turned it up and finished with 20 points. He dropped 27 points to go with six steals and four assists in the semis, with 12 more points in the championship game. Everyone on this Bearcats team had a role and filled it. Hudgins was undoubtedly the leader and showed it.

The hometown hero came out in front of a record-setting Elite Eight crowd and blew the roof off, electrifying the Screaming Eagles faithful with basket after basket. He scored 31 in the largest upset of the modern Elite Eight era before going for 22 in the semifinals loss to Point Loma. Stein set the program scoring record amid chants of “M-V-P” at The Ford Center while averaging seven rebounds a game.

Three of the four lower seeds advanced to the semifinals in the men’s #EliteEight on a memorable night that saw a record-setting crowd: https://t.co/nUVgDpRSgC.#D2Hoops / #MakeItYours pic.twitter.com/150ldPJurO

Guers and Nova Southeastern’s Mark Matthews had a duel to remember in the quarterfinals. Matthews finished with 31 points and 13 rebounds, while Guers propelled his Hawks to victory with 31 points of his own, marking the first time two opponents surpassed the 30-point mark in the Elite Eight since 2016. Guers hit six 3-pointers in that game, part of a 16 3-pointer output by the Hawks, second-most all-time in the Elite Eight. Guers ended his 2019 season with 23 points and seven rebounds in a semifinal loss to the eventual national champions.

Hommes was the DII national player of the year for a reason, and he showed it in Evansville, Indiana this past week. Smooth and effortless, the 6-8 junior guard played the role of both big man and guard for the Sea Lions. He averaged 22.7 points per game in the Elite Eight while ripping down 16 rebounds over his three games. Most impressively, he shot 44.4 percent from behind the arc (8-for-18) and 90.9 percent (20-for-22) from the charity stripe.

“Joey Buckets’” value to the Bearcats was apparent in the time he missed to injury as much as it was on the court. The Bearcats offense took a leap forward in the second half of the Saint Anselm game with Witthus playing tough inside and out. His 24-point output in the finals propelled the Bearcats to the championship, and his miracle 3 as time expired on the shot clock turned the tide of the game.

Joey Witthus banks it in with the shot clock winding down! pic.twitter.com/o0zr5MgqP4

Ryan Hawkins, Northwest Missouri State: Hawkins was the X-factor for the Bearcats, doing a lot of the dirty work underneath. He posted a double-double in the semifinals while adding four blocks and three steals and pulled down 12 more rebounds with four more steals in the title game.

Chris Paul, Saint Anselm: No, not that one. The Hawks’ Paul put up a double-double (16, 11) in the quarterfinals victory and scored 21 more in the semifinal’s loss.

Shaun Willett, Queens (NC): Like Matthews on Nova, Willett had a monster double-double in Queens lone game in Evansville. He posted 27 points and 11 rebounds for the Royals.

Dunk of the week:

The freshman guard missed the quarterfinals and didn’t start the semifinals. Once Bernard entered the game for the Bearcats in the semis, the whole tempo shifted. When he slammed down this dunk, the tide of the Elite Eight turned.

Diego Bernard for Northwest Missouri State with the SLAM! pic.twitter.com/TnHBD6LPeW