Zion Williamson lit up social media once again on Saturday, and for good reason. The Duke freshman arguably made his most jaw-dropping play of the season when he came out of nowhere and skied for a block against Virginia’s De’Andre Hunter.

That’s no small statement, as Williamson is a regular on highlight reels. Here’s the play everyone is talking about:

Let’s break it down from every angle.

Credit to The Athletic’s Sam Vecenie for capturing this shot. His caption says it all:

THIS IS WHERE ZION IS WHEN HUNTER CAUGHT THE BALL.

This somehow resulted in a block. This is impossible. pic.twitter.com/vFrZJTC8eM
— Sam Vecenie (@Sam_Vecenie) February 10, 2019

Unofficial timing, but try it yourself. It’s not as if Hunter took a long time to load up. Williamson just came out of nowhere.

And he made up almost 25 feet in that time span

The width of a college basketball court is 50 feet. Williamson started at about the halfway point, and Hunter was a foot or two from being out of bounds. So that’s how far the Duke freshman sensation traveled in less than two seconds, combining his sprint and the jump.

The above photo is impressive, but so is Williamson’s launch point

Ok, so it’s ridiculous that Williamson was able to complete the block based on where he started in the picture above. And he made up some ground sprinting out to Hunter. But the image below shows that this had far more to do with his vertical explosiveness than his speed.

It’s absurd that he blocked this shot based on where he started his jump. Take a look:

It would have been impressive for a normal player to contest Hunter’s 3 from Williamson’s starting position. Getting any piece of the ball might be possible for players in the 99th percentile of athleticism.

But Williamson didn’t just deflect this shot. He got so high that he blocked it pretty easily, and with force. Photo proof: Hunter’s shot had a little air under it, too, as you can see. Just ridiculous on so many levels.

Williamson didn’t just travel from one side of the floor to the other to complete the block. He started the possession on Guy, on the top-left side of the floor. He ended in the bottom-right corner. 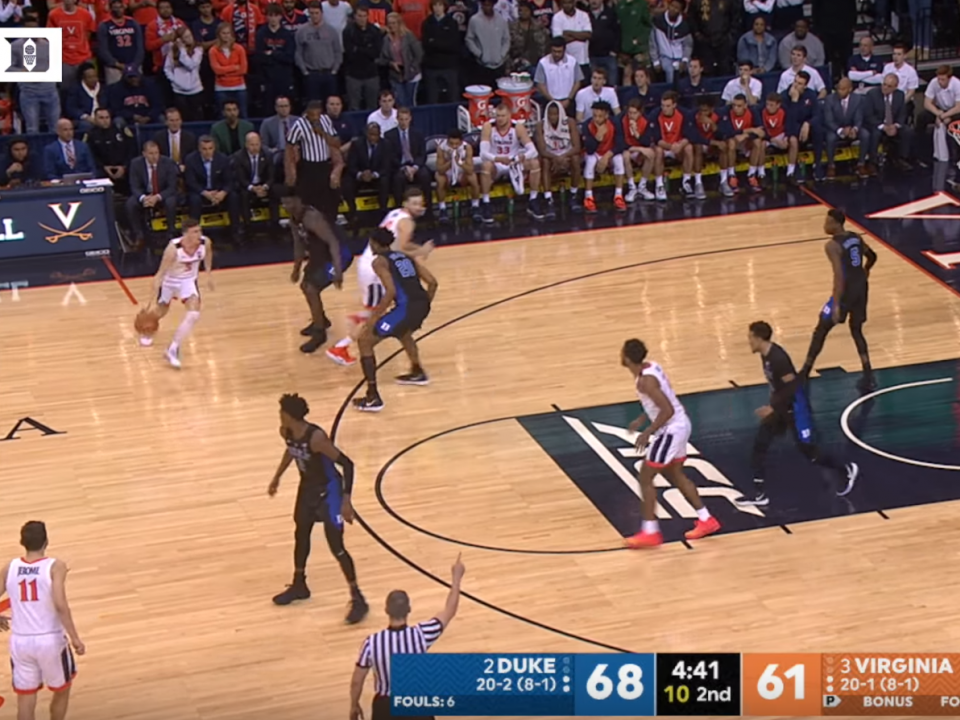 Then he briefly turns to Jay Huff, sees R.J. Barrett has him covered, and recovers (quite the understatement) to Hunter. Watch it again in full speed:

And now, watch it in slow-mo

This block by Zion is one of the most athletic plays I have ever seen pic.twitter.com/SEWQo61g4E

Williamson is arguably having the best statistical season in modern college basketball history, and that doesn’t even capture how fun he is to watch. Awesome stuff all around.