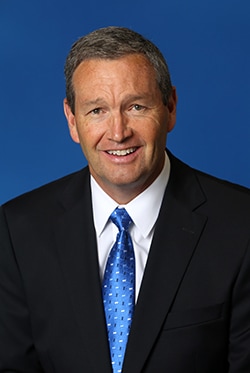 Barnhart, who was named Athletic Director of the Year this spring by Sports Business Journal, has been in his current role at Kentucky since 2002. Previously, he held the same position at Oregon State for four years. Barnhart, who earned his bachelor’s degree from Ottawa University in Kansas in 1981 and a master’s degree from Ohio, also has held positions in athletics departments at San Diego State, Oregon, SMU and Tennessee.

Barnhart, who also will join the Division I Men’s Basketball Oversight Committee this year, has led Kentucky’s athletics department to unprecedented success, with its six best finishes in the Learfield IMG College Directors’ Cup standings coming in the past seven years. Since Barnhart’s arrival at Kentucky, the men’s basketball team has advanced to the Elite Eight nine times, made it to the Final Four on four occasions and won the 2012 national championship.

“Being asked to serve in this role by my wonderful colleagues on this committee is one of the highest honors I’ve ever received,” Barnhart said. “The 10 of us carry a huge responsibility, not just with the selection, seeding and bracketing of teams each year, which draws the greatest amount of attention, but also as a group charged with working with other constituents to manage the health of the sport of college basketball. It’s an incredible challenge and one we will continue to take very seriously.”

Barnhart is the third director of athletics from Kentucky to serve as chair of the Men’s Basketball Committee, joining Bernie Shively and C.M. Newton.