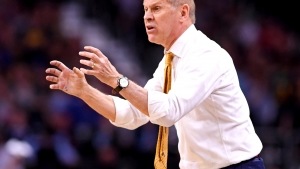 John Beilein, back from heart surgery, is grateful for another season with Michigan


John Beilein’s world is different now. You ask the coach of Michigan what it means to have his players around him, after what he went through this summer, and he rubs his fingers up and down his chest. Never had to do that before.

“You’re talking about this?”

Yeah, that. The scar that shows where the doctors did their work during double bypass heart surgery in August. He’s doing well now. Oh, in preseason practice he’s had to watch the chest passes, do his rebab, and get his rest. As Wolverines guard Zavier Simpson was saying, “He’s still the same Coach B, but his voice is a lot lower. He’s not yelling as much, but you can tell he wants to jump in. You can tell he’s holding himself back. Sometimes he gets to yelling, that’s when I come in, `Coach B, let me talk to them. Relax.’”

It was so wonderful to be back on campus this past weekend with 〽️ Nation. Thanks for the amazing reception.

Celebrating the 2017-18 season 🏆🏆 was another memory we won’t forget & we look forward to more great seasons ahead #GoBlue pic.twitter.com/lyDHLdlZZc

But Beilein has come a long way from August. Four months after coaching the Wolverines in the national championship game, he was being wheeled into surgery. He can talk now about the one-on-one game going on in his mind then, between confidence and alarm.

“I wasn’t scared of the pain or operation but when they say 1-in-100 mortality rate, you’re not used to 1-in-100,” he said. “But we had great doctors, and I was taking that 99 percent and thinking I’m in good shape. But then you look at my life, the blessings I’ve had in my life, sometimes things are going to even out. You’re going to be dealt some tough things.”

College kids sometimes consider themselves invulnerable. Comes with youth. But coaches can get caught up with that, too. Beilein admits he did.

“It’s (heart issues) hereditary in my family, but I thought, `I’m going to dodge that.’ Then reality hits.”

Before the surgery, he gathered his Wolverines to give them the news. This was a far different meeting than how to try to beat Villanova.

“I try to lead in the best way possible and when I am at my best I can help this team win.” – Charles Matthews pic.twitter.com/qev7bqOIll

Charles Matthews: “It was such a scary moment. It puts so much more in perspective; you enjoy each and every day you have with your loved ones. You just try to tell everybody you love them, because you just never know.”

Simpson: “I thought there was a little more to it than what he was telling us, which I’m pretty sure there was, because he obviously doesn’t want to tell his players everything, because he doesn’t want to leave us too heartbroken. But it was kind of like a dropoff. It was difficult for us a team.”

Moments such as that, the meaning of being a team echoes loudly.

“I think they felt it as much as I did,” Beilein said. “I was walking into the locker room after I told everybody and Zavier Simpson says, `Coach, let’s pray together.’ That’s good stuff.”

Beilein is, of course, a changed man now, having gone through that experience. More laid back. Less intense. Right? Right? Well . . .

“The answer is unfortunately no,” he said. “I’m still way too passionate about winning and providing our kids with the best opportunity. Sometimes (wife) Kathleen gets mad at me about that; I don’t smell the roses enough. I’m trying to. I am trying to every single day.  But I hate to lose so much, I do everything I can to win, and sometimes that gets in the way of this great perspective on life I’m supposed to have after that, the airplane crash (before the 2017 Big Ten tournament), everything. But I’m working at it.”

Highlights from last night’s @MaizeRageUM Open Practice! Thank you to @JohnBeilein for getting everyone amped for the upcoming @umichbball season! #GoBlue 🏀〽️ pic.twitter.com/45z0txyAjq

Talk about your tough matchups, try new perspective on life, going against a deep revulsion to losing.

“If I played blackjack, if I won a thousand dollars playing blackjack, it would mean nothing,” he said. “If I lost $50, I’d hate it. That’s the way many coaches are wired, actually.”

Speaking of losing, about that national championship game against Villanova. At the risk of bringing up a distressing memory to a guy recovering from heart surgery, has Beilein watched the tape of the 79-62 thumping yet?

Rivalries can get intense, as we saw Saturday in East Lansing.

They can also bring out the best in people, as @JohnBeilein found out after double-bypass heart surgery. 🙌👍👏 pic.twitter.com/t7ajaSyVEe

“Not one time,” he said. “Why put yourself through that pain again?”

But then he mentioned, “I’ll probably get a glass of wine and watch it,” and added it might not be that horrendous. Not that like watching the 82-76 championship game loss to Louisville in 2013. That was awful.

“Because I think they were really a better team. When I see (Donte) DiVincenzo’s shots again like I saw them first hand, I’ll know no matter what we did, he was making those shots.

ALSO: Jon Teske could be the next big thing for the Wolverines

“This year, nobody was beating Villanova, I think they may have won the last 10 Final Fours, they were so good. When we lost to Louisville, a bounce of the ball, anything could have changed that.”

So now the 65-year-old man with the repaired heart prepares for his 12th season in Ann Arbor. And if he tries to push too hard and forgets how he spent August, he has a family to remind him, doctors to advise him and players to share prayers.

“I’ve got a bunch of people looking out after me.”