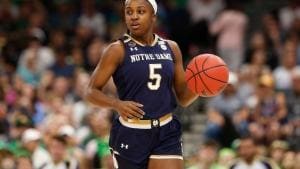 
Jackie Young’s career at Notre Dame is over, but it didn’t pass by without being memorable.

After spending three years with the Fighting Irish — one of which concluded with a national championship — the Las Vegas Aces made Young the No. 1 overall pick in the 2019 WNBA Draft. Young will suit up alongside other former college stars like Washington’s Kelsey Plum, South Carolina’s A’ja Wilson and Notre Dame’s Kayla McBride, as Bill Laimbeer’s side seeks a playoff berth in 2019.

Let’s look back on all Young accomplished while playing for Muffet McGraw’s Fighting Irish.

LOOKING BACK: Here are 5 of the most surprising runs in women’s NCAA tournament history

A 6-foot guard from Princeton, Indiana, Young made an impact right away for the Fighting Irish. She was twice named ACC Freshman of the Week and landed on the All-ACC Freshman Team.

She never started a game, but played 21.4 minutes per-game and showed off her knack for rebounding, averaging 7.3 points and 4.6 rebounds per-game.

OLD SCHOOL: Baylor explains why it doesn’t need the three-pointer

One of Young’s best performances as a freshman came in the second round of the NCAA tournament against Purdue, where she racked up 16 points, six rebounds, four assists and a block in a Notre Dame victory. The Fighting Irish finished the season 33-4 and with an ACC title, but fell in an Elite Eight bout against Stanford.

Champion as a sophomore

Young became a full-time starter as a sophomore and all of her stats saw a boost. She averaged 14.5 points, 6.6 rebounds and 3.7 assists per game while shooting 52 percent from the floor.

With teammates like Arike Ogunbowale and Marina Mabrey, Young didn’t always score the most points, but she always left her mark on the game, either by way of defense, rebounding or passing. Young corralled 13 rebounds in an Elite Eight win over Oregon, and dished out eight assists twice in ACC victories over Florida State and Virginia.

While Ogunbowale received much of the attention in Notre Dame’s Final Four triumph over UConn in 2018 for her buzzer-beating heroics, Young played one of the best games of her career, dropping a stat line of 32 points, 11 rebounds, a steal and a block. Young’s scoring total was not only a career-high, but the seventh-most ever scored by a single player in the Final Four.

In the national championship game against Mississippi State, Young notched six points, two rebounds and two assists in the win for Notre Dame. She notched the basket that tied the game up, setting the stage for more heroics from Ogunbowale.

Unbelievable shot from Arike Ogunbowale. But there’s no game-winner for Notre Dame without Jackie Young tying the game up with under a minute to play pic.twitter.com/4aGG9P2YPL

One of the ACC’s best as a junior

Again, Young put up better stats in her junior season at Notre Dame. While carrying the pressure of trying to defend Notre Dame’s championship, Young averaged 14.7 points, 7.4 rebounds and 5.1 assists per-game while shooting 52.8 percent from the floor and 45.2 percent from 3-point range. Young finished 12th in the nation in assists.

No. 1 @NDwbb‘s Jackie Young had a career night vs. Tennessee en route to the program’s seventh triple-double.

Catch Jackie and the Irish when they battle UNC, Sunday at 2 p.m. ET.#GoIrish pic.twitter.com/x8Y73aJbfg

While Young put up her fair share of highlight-quality plays in the 2018-19 season, she saved her best for Greensboro, N.C. in the ACC tournament. Young posted per-game averages of 19.3 points, 10 rebounds, six assists and a steal while shooting 55.8 percent from the floor over three games as the Irish cruised to another ACC crown. Young was named MVP of the ACC tournament.

In what would be her final NCAA tournament run, Young averaged 12.3 points, 7.8 rebounds and 4.1 assists per-game over six contests. Unfortunately for her and the Irish, her play wasn’t quite enough as Notre Dame fell to Baylor by a single point in the championship game in Tampa, Florida.

Young tallied 12 double-doubles as a junior for Notre Dame, setting the single-season record for a guard. She was an All-American honorable mention as a junior, and made an All-ACC team each year she was at Notre Dame.