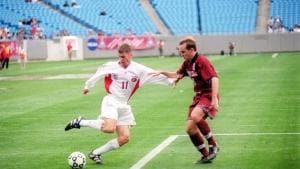 It's been 20 years since Indiana and UCLA's 142-minute, 4OT College Cup marathon


It wasn’t the first time that No. 2 Indiana and UCLA — two of DI men’s soccer’s winningest programs — met when the Bruins visited the Hoosiers on Monday Sept. 2. In fact, it was the seventh matchup since the four-overtime thriller from the 1999 College Cup semifinals.

KICK OFF: IU-UCLA tabbed a game to watch for 2019 opening weekend

Nearly two decades later, we caught up with a few of the pieces from that College Cup marathon and look back at the historic matchup.

Ryan Mack maneuvered downfield as he had numerous times on a brisk December night, trudging onward as cramps subdued his legs.

Only this time, the midfielder found an open patch of grass and the ball coming to his feet just above the 18-yard box. His position, spacing and a rush of adrenaline prompted a left-footed strike, one that eluded the outstretched arms of UCLA goalkeeper Nick Rimando and found the lower left corner of the net.

After four overtimes and 142 minutes of soccer, Mack had put the Hoosiers through to the NCAA tournament final, where they’d capture the program’s fifth national championship a few days later over Santa Clara.

“I can’t believe I even made it to the end,” Mack told NCAA.com. “When you start getting those cramps, you can be as tough as you want. There is nothing you can do when your legs are locking up.

“I’m still tired from that game.”

It’s been almost 20 years since Mack’s game-winning blast propelled Indiana to a whirlwind win over UCLA at the 1999 College Cup semifinal.

But the arduous undertaking nearly ended as a routine result.

Leading 2-0 late in the match, IU appeared to be in control. The Hoosiers hadn’t conceded a goal in their first three postseason matches and were on the way to a fourth consecutive shutout when the Bruins equalized with two tallies in the contest’s final 15 minutes.

Prior to the current set of rules and regulations, overtime periods were 15 minutes apiece and four additional sessions could be played before penalty kicks would decide a match.

Indiana coach Jerry Yeagley was in the process of constructing a penalty-kick lineup as the game-winning sequence unfolded, looking up moments before the winner was scored.

Like Mack’s quick-release shot, Yeagley believed the timing of the goal to be unpredictable.

Following an illustrious 30-year career, Yeagley retired in 2003. He won six championships and still holds the record for the most wins in Division I men’s soccer with 544 victories.

Six years removed from Yeagley’s presence on the sidelines, his son Todd was hired as the head coach at Indiana. On Monday, a decade later, the younger Yeagley managed the Hoosiers against UCLA on a field bearing his father’s name in the year of a milestone anniversary.

“I’m so proud of Todd, he’s so much better than I ever was,” Yeagley said. “I’m just glad I can be close to the program and have my son continue our tradition.”

Since 1999, the programs have met six times. Most recently, UCLA took a 1-0 win in Bloomington in 2013 to snap a four-game skid in head-to-head matchups with IU. Overall, Indiana owns the all-time series with a 10-8-0 lead.

Yeagley also noted a decorated history between Indiana and UCLA. The two programs have a combined 12 national championships. Despite the distance between schools, Yeagley and former Bruins coach Sigi Schmid prioritized their schools meeting periodically in the regular season.

Indiana and UCLA opened 2019 at Bill Armstrong Stadium as part of the Adidas/IU Credit Union Classic. Coincidentally, both teams won in overtime ahead of Monday’s meeting.

The Bruins got a 95th-minute winner from Milan Iloski while No. 2 Indiana stormed back from a two-goal deficit, earning the win in double-overtime off of a golden goal by Herbert Endeley.

Due to weather, the match was postponed to Monday.

But when the two teams met on Jerry Yeagley Field at Bill Armstrong Stadium, it was only fitting that the match required additional time.

On a Hoosiers corner kick in double overtime, the ball careened across the middle of the box as the sophomore made his run from the far post. Multiple redirecting touches were made, setting up Maher’s strike into the roof of the netting for the golden goal.