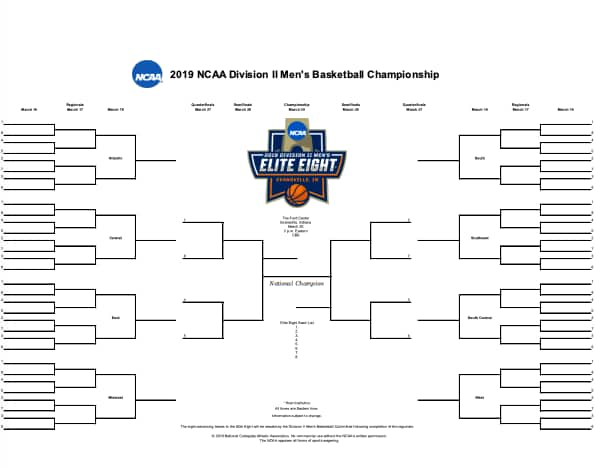 
The road to the DII Men’s Elite Eight is a five-month journey that culminates with the DII men’s basketball championship tournament. Sixty-four teams begin the battle every March, but only one comes out the victor.

Let’s take a look at how the DII men’s basketball tournament works.

When did the DII men’s basketball tournament begin?

You can date the tournament back to 1957 when it was the NCAA College Division Basketball Championship. Wheaton (Ill) finished off its 28-1 season by defeating Kentucky Wesleyan 89-65 in Evansville, Indiana for the first national championship. It would remain that way — and in Evansville — until 1974, when Morgan State defeated Missouri State 67-52 in what is considered the first official Division II basketball championship. By 1982, NCAA DII was rolling with both men’s and women’s sports, and with the DII women’s basketball tournament joining into the mix, the tournament was coined the DII men’s basketball championship. The 2020 season will end crowning the 64th national champion.

How do teams get into the DII men’s basketball tournament?

Like March Madness on the Division I level, there are 64 teams that enter the DII men’s basketball tournament. Of those 64 teams, 24 enter the bracket as automatic qualifiers from winning their respective conference tournaments. Those 24 conferences are split up into eight regions. It looks like this:

(* = Independents do not receive automatic bids)

So, where do the other 40 teams come from? You could say the process begins three weeks before the season ends. This is when the NCAA releases its first regional rankings. Those rankings, released every Wednesday over the final three weeks of the season, give us an idea of the top eight teams in each region.

Once the conference tournaments are complete and the 24 automatic bids are resolved, the DII men’s basketball selection committee goes to work. What are the criteria they are looking for?

It starts with the won-lost record in Division II which needs to be .500 or better while having competed against at least 22 DII men’s basketball programs. If the program qualifies, next the committee looks at the following.

Once the committee comes to its consensus 40 at-large teams, the bracket is announced in a Selection Show on NCAA.com the Sunday before the tournament begins.

What does the DII men’s basketball championship bracket look like?

The championship bracket is set up like the traditional 64-team bracket we have become accustomed to thanks to March Madness. Two regions are placed in four separate quadrants. Play begins in eight single-elimination regional tournaments. The eight regional champions emerge as the DII Men’s Elite Eight and head to a final site for the remainder of the three rounds of play.

Beginning with the 2016 DII Men’s Elite Eight field, the remaining teams were seeded Nos. 1 through 8. The 2019 season was the first time that lower seeds advanced to semifinals play, as three of the four lower seeds accomplished the feat.

The quarterfinals and semifinals will take place on the same site, returning to Evansville once again in 2020,

2020 CHAMPIONSHIP: Men’s basketball champs to be combined at 2020 March Madness 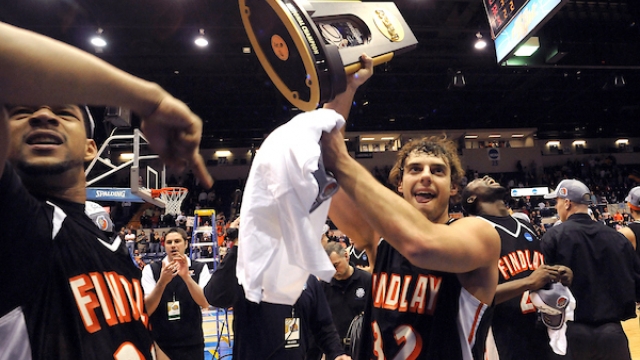 You can take a look at the programs with the most DII men’s basketball championships here and see the complete championship game history below.