When Douds took over as head coach in 1974, The Way We Were by Barbara Streisand was the No. 1 song and All in the Family was the No. 1 TV show. Essentially, two titles the players he has coached for the last decade would give a resounding, “huh?”

In the 45 years since, Douds has put up some remarkable numbers, ranking him not just amongst the greats of DII football, but on all-time NCAA college football leaders lists. Some of his most notable accomplishments have come on offense, producing Harlon Hill finalist and All-PSAC quarterbacks quite a few times. One of those quarterbacks was James Franklin, who earned All-PSAC East quarterback honors in both 1993 and 1994. Franklin, of course, is now the head coach of Penn State.

Douds historic career is now in the books, with ESU playing two more road games to close out the season. Let’s take a look at some of the more remarkable numbers in his career.

MORE: What we learned from the first regional rankings of 2018

The fewest number of head coaches any other PSAC school has had in the 45 years East Stroudsburg has had Douds as head coach. Douds has coached against 117 opposing head coaches, none more that Millersville’s Gene Carpenter whom he squared off with 27 times.

Harlon Hill finalists Douds coached. Quarterback Jimmy Terwilliger won in 2005 and was named the interim head coach on Saturday when Douds stepped down.

The number of father/son letter-winner combinations Douds has coached in his 45 years, showing just how long he’s actually been there. Mike and Jimmy Terwilliger and Andy and Matt Soltes were quarterbacks that threw touchdown passes in a Warriors uniform. You may recognize the names of the younger Terwilliger and Soltes — they are two of the most prolific in DII football history, with Jimmy the all-time leader in touchdown passes and Matt not far behind in third. 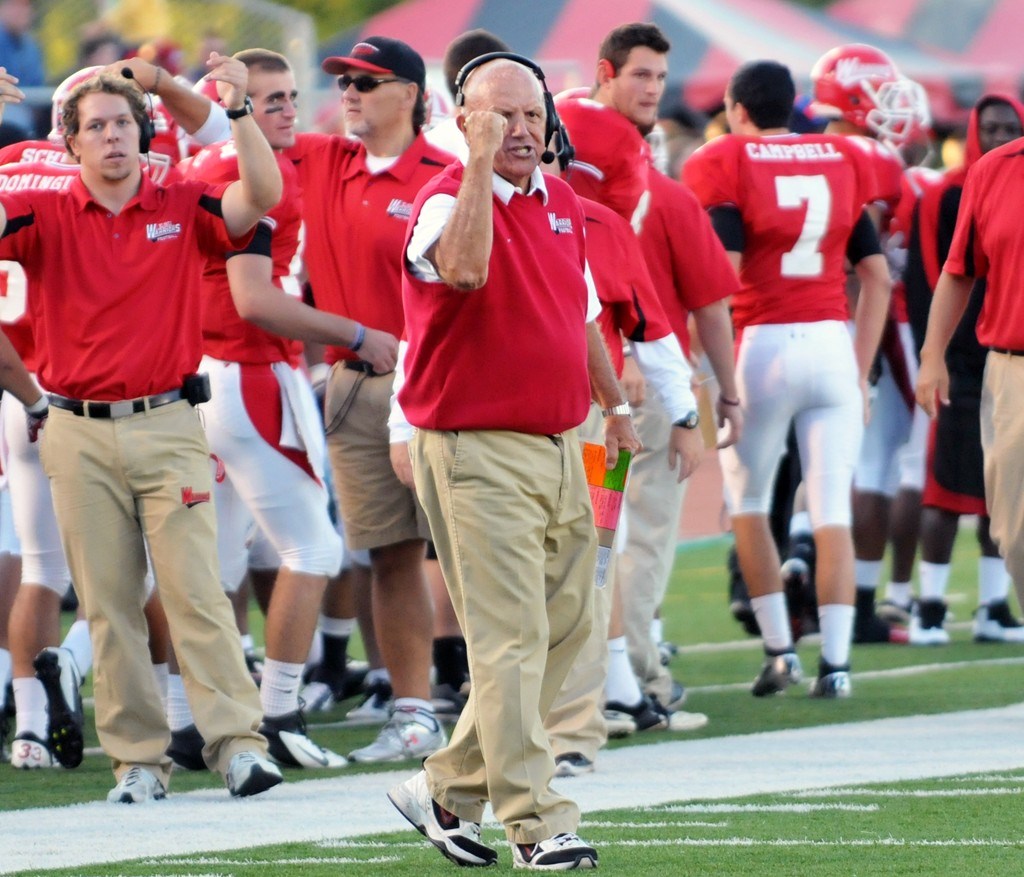 Longest winning streak Douds put together, starting with a 10-0 run in 1975 and going 9-0 in 1976 until the Warriors tied in the final game of the season.

Points per game the Warriors have scored since Douds took over. They’ve tallied 12,729 points in 471 games.

Years Mike Terwilliger has been Douds’ assistant. Terwilliger, who was Douds first quarterback in 1974, earned the DII Assistant Coach of the Year Award one year after his son, ESU quarterback Jimmy Terwilliger, earned the Harlon Hill Award. Under Douds and his father’s guidance, the younger Terwilliger set the DII football mark for career passing yards with 14,350 (it has since been broken twice) and still holds the DII football record with 148 career touchdown passes.

This is a wild number. Coach Douds has racked up exactly 65 wins since his 65th birthday during the 2006 season.

Congrats are in order Rock Nation… please send them to @ESUWarriors and Denny Douds. Denny is the PSAC record holder in coaching wins. He’s also a 1963 SRU alum and a member of our Hall of Fame. Congrats on a heckuva career coach Douds. 👏 https://t.co/dU6qZhseLY

The total number of wins Douds had in his coaching career at East Stroudsburg. He was on the sidelines for 539 games in his tenure, starting in 1966 as an assistant. To put that in perspective, the ESU program has just 171 more wins outside of Douds career.

Yards quarterback Jake Cirillo threw for in Douds’ final game Saturday. It is only fitting that the head coach who has pumped out some of DII football’s best quarterbacks over his tenure sees his freshman quarterback blow up for a career-high 400-yard, three touchdown day.

Career games Douds has coached. That makes him the all-time leader in DII football and ranked seventh overall in NCAA college football history.

MORE: DII programs with the most national titles