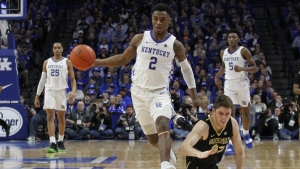 Here are 5 of the fastest college basketball point guards


These are the guys who zoom from coast to coast and if you blink, you might miss them.

Here are five of the speediest point guards in America.

The Russell Westbrook comparisons may not be fair yet, but they don’t just appear out of thin air. Morant is a dynamite athlete. He’s a phenomenal dunker, but his end-to-end speed is what makes him so hard to stop.

The first play of this clip is especially telling. Morant ends it with a thunderous slam, but the speed in which he gets from half court to the rim is breathtaking. Part of the reason he’s able to elevate so explosively is because of how fast he’s already moving:

There’s just no easy way to guard Morant. Sag off, and you give him a chance to build up a head of steam. Press him, and this happens:

Morant is an absolute terror in transition. It’s why he’s averaging 24.4 points and 10.3 assists per game.

It’s not a coincidence that Kentucky started to take off when Hagans did. He’s still a bit raw, but Hagans is one of the best point guard athletes in college basketball. That manifests on both ends of the floor.

Hagans is an iffy shooter, and his decision making could use some work. But he’s able to beat just about anyone off the dribble and get to where he wants on the floor at all times. That makes the game a heck of a lot easier.

Here’s where Hagans’ speed comes into play. He doesn’t go end to end here, but Hagans intercepts a Kansas pass. He’s even with a few Jayhawks when he gets the ball, but his first few steps are so dynamic that he leaves them in the dust. It sets up an easy fastbreak hoop:

There was a stretch where Hagans recorded multiple steals in nine straight games. That’s when you really see his jets in action. Like Morant, Hagans if a handfull to deal with in transition.

Maryland is flying under the radar a bit this season, but it’s worth pointing out what the Terrapins have done. Maryland is 21-7 with a solid 12-5 Big Ten mark; it wasn’t expected to do much coming into the year. And Cowan has been its best player.

The junior point guard is all over the place, and that’s meant as a compliment. Cowan assists on almost 27 percent of Maryland’s buckets when he’s in the game, one of the higher marks in the country. And speed is easily his best attribute.

Here’s a play that demonstrates Cowan’s high-end jets. Part of the reason he’s so good is because he doesn’t need a ball screen in order to penetrate, like so many guards do. Cowan seemingly has little room to operate here, but his first step is so explosive that he blows by his defender for the easy deuce:

Cowan’s speed is the kind of thing that bends defenses. Maryland ranks 22nd on offense, per KenPom, and he’s easily the Terrapins’ best shot creator. Cowan is a joy to watch.

He’s no Morant, but the dunk Harper threw down against Xavier in Maui illustrates just how dynamic he is with the ball:

Harper loves to reject ball screens, and that’s something you can get away with when you’re as fast as he is. Harper isn’t efficient as you’d like him to be, and can be a bit reckless. Sometimes he moves too fast for his own good. But few defenders can stay in front of Harper; he’s averaging 15.1 points and 5.9 assists, so he’s creating plenty of offense for Auburn.

He’s gotten to the free-throw line at least four times per game in every college season, a hefty clip for a 5-11 point guard. That’s a function of opponents having trouble keeping him out of the paint.

Waters’ lateral quickness probably stands out more than his end-to-end speed, but that’s not a knock. Waters is agile and fast. It’s why he’s so hard to stay in front of.

His speed comes across a bit more subtly than others on this list, but it’s there. Check out this clip against Texas A&M, for instance. Waters gives a slight jab in the opposite direction and gets his defender leaning just a smidge. That’s all he needs to blow by him to get the layup:

Waters is averaging 15.7 points, 5.9 assists and 3.0 steals per game for the surprising Tigers. Like Hagans, any defensive possession ending in a Waters steal is trouble for the opponent. He has the ability to be a one-man fastbreak when he builds up a head of steam.

Waters could lead LSU deep into the NCAA tournament.