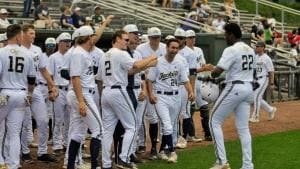 Here are 5 of the biggest surprise teams of the 2019 college baseball season, so far


The 2019 college baseball season is coming to its end. With just two weekends left before the conference tournaments begin, the Road to Omaha is getting a bit clearer for the 64 teams who will get a chance to play for a trip to the College World Series.

While the usual suspects are all in play, let’s take a look at five teams that stood out this season and have a real chance to get to the NCAA tournament.

We’re not trying to pat ourselves on the back, but we did say that Tennessee would be the turnaround team in the SEC. So we aren’t completely surprised by this success, but we didn’t expect the Vols to be a 33-win team with two weekends remaining.

There has been good and bad this year for Tennessee. It has struggled recently against its ranked SEC foes (10-14 in conference play) but the Volunteers have series wins over Georgia and South Carolina. Sophomore transfer Alerick Soulaire is turning into a nice piece in the lineup and is on a nine-game hitting streak. Garrett Stallings has filled the bill as the Friday night ace. With a series against Florida and Ole Miss left to close out the season, Tennessee could improve its NCAA tournament chances and really be the biggest surprise of 2019.

Like Tennessee, the Sun Devils looked to be a tournament lock before conference play started, starting the season 20-0. But let’s be real, the Pac-12 is an elite conference this year, boasting the top two teams in the nation. It hasn’t been easy for anyone.

The Sun Devils have two of college baseball’s biggest stars this season. Spencer Torkelson has put up better numbers than his historical 2018 freshman of the year campaign, hitting .349 with 17 home runs and a 1.128 OPS. Hunter Bishop is one of the breakout stars of 2019, with his name being thrown around player-of-the-year conversations. Bishop had a .276 career average entering 2019, with 10 doubles and 10 home runs. He’s currently hitting .357 with 12 doubles, 21 home runs, and a 1.306 OPS. There is plenty to feel good about in Tempe.

The Yellow Jackets are another team we saw doing great things this preseason, as a possible Super Regional team in 2019. But a top 10 team in the country? That’s more than we expected, as this is a team with real aspirations of Omaha. It’s definitely time to believe the buzz.

Georgia Tech has series wins against Louisville, North Carolina, and Clemson while also taking two from Auburn and two from Georgia outside of conference play. If you had sophomore Michael Guldberg leading the ACC in batting average with two weeks to go, raise your hand because we certainly didn’t see that coming. Kyle McCann has made the worry of replacing All-American catcher Joey Bart stress-free, hitting .311 with 19 home runs, with a handful of them coming in dramatic, game-changing fashion. The pitching has its ups and downs, but when they are on, the Yellow Jackets are a tough team to beat that fights to the end of every game.

After opening the season 2-2, the Gauchos won 15 of their next 16 games and have yet to relent. They have a big series sweep against UC Irvine and a season-closing series against Cal Poly may decide the Big West.

So, where’s the turnaround coming from? Junior catcher Eric Yang is having a breakthrough year, currently third in the Big West with a .372 average and has launched six home runs, which are six more than he had in his previous two seasons for the Gauchos. Tommy Jew (11), Armani Smith (10), and Thomas Rowan (9) lead a powerful lineup that leads the Big West with 54 home runs. The Gauchos pitching is tops in the conference in ERA and strikeouts per nine, while freshman Michael McGreevy has been the stopper they need out of the bullpen, going 5-0 with six saves and a 2.01 ERA. It’s a total team effort, but the Gauchos certainly look tournament bound.

The Sycamores haven’t made the NCAA postseason since 2014, and with three more wins than last year, it looks like they will snap that streak. Already in the early projections for the field of 64, Indiana State sits atop the Missouri Valley Conference with an 11-4 record against its MVC foes.

There isn’t a standout slugger in the lineup as this team hits just .268 with 31 home runs and a .746 OPS. That’s not to say this team can’t produce runs, it’s just more of a grind. Pitching is where the Sycamores excel, posting a 3.10 ERA that is seventh-best in Division I. Righty Collin Liberatore has been sharp all season, undefeated at 9-0 with a 1.80 ERA, a 0.88 WHIP, and holding opponents to a .179 average. Triston Polley and Tyler Whitbread round out a very solid rotation. Indiana State just took two of three against Illinois State — which is also currently projected to hit the field of 64 — so that should give them momentum as they close out the season against fellow MVC heavyweights DBU and Bradley.

Five more who have seen their stock rise in 2019:

Southern: The Jaguars went from worst to first in the SWAC, turning around a nine-win season in 2018 to the top seed in the Western Division as they head to the conference tournament.

Omaha: Talk about a rebound. Omaha had 15 wins last season but is already at 26 and in first place of The Summit League. A big season-ending series against Oral Roberts could tell us a little more about its fate.

Harvard: How about The Crimson? Harvard, who broke the 20-win plateau for the first time since 2006 last season, improved its win total by three this season and finds itself in the Ivy League Championship against Columbia with a spot in the NCAA postseason on the line.

For the first time since 2005, we are Ivy League Champions! #GoCrimson pic.twitter.com/HKVJqeNvvW

Fresno State: The Bulldogs — owners of what many consider to be the biggest Cinderella season in modern College World Series history — haven’t been to the postseason since 2012. They are perched atop the Mountain West with a huge showdown against second-place San Diego State coming this weekend.

BYU: The Cougars are enjoying a nice bounce-back season after finishing with just 22 wins last season. Brock Hale has certainly been a player to keep eyes on as the season winds down and BYU looks to head back to the NCAA tournament after a one-year hiatus.

Share. Twitter Facebook Google+ Pinterest LinkedIn Tumblr Email
Previous ArticleMinnesota softball wants to host an NCAA regional. First, the Gophers have to win the next game.
Next Article Bubba Wallace spends time at the track with his mom Desiree