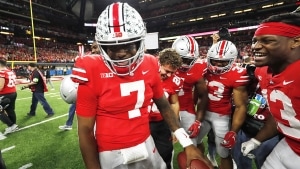 COLUMBUS, Ohio — It was subtle, but that definitely was the Heisman Trophy pose that Dwayne Haskins Jr. struck in the end zone after throwing his fifth touchdown pass of the Big Ten championship game last weekend.

It wasn’t quite the hey-look-at-me, Desmond Howard version, but it was an unmistakable Heisman stiff-arm, high-leg stance, even if just for a second.

“I wasn’t planning it,” the Ohio State quarterback said. “I felt it was the right moment for me to do that. I tried to be low key with it, but that didn’t work. It wasn’t a full-on Heisman pose, but it’s a cool picture to have one day.”

Why not? The supremely confident Haskins put up Heisman-worthy numbers, broke records and led his team to a 12-1 mark in a tumultuous season that will end with a trip to the Rose Bowl — two spots outside the College Football Playoff. The other two finalists, quarterbacks Tua Tagovailoa of Alabama and Kyler Murray of Oklahoma, led their teams to playoff berths.

The prize will be awarded Saturday night.

Haskins finished with 4,580 passing yards and 47 touchdowns, both of which led the nation. He broke 11 Big Ten and Ohio State single-season records. He’s tied for 10th all-time for passing touchdowns in a single season in NCAA history. He was Big Ten offensive player of the year and MVP of the conference championship game.

After starting 12 games as a college quarterback, he’ll likely enter the NFL draft, where he could be a first-round pick.

He remade the Ohio State offense in his own image, turning the Buckeyes into a pass-first team after four years of J.T. Barrett running for first downs. Then, late in the season, Haskins showed he could put his head down and run the ball effectively when he had to.

“The quarterback’s dream is to sit back and pick a defense apart,” Haskins said. “I gave coach (Urban) Meyer the confidence to do that. I gave coach (Ryan) Day and coach (Kevin) Wilson an opportunity to call great plays for me and execute them. We just had a whole bunch of fun this year.”

The 21-year-old New Jersey native who played high school ball in Potomac, Maryland, is one of the best throwers ever to wear an Ohio State uniform. In the last two games of the season, against rival Michigan in the season finale and Northwestern in the conference championship game, Haskins threw for a combined 895 yards and 11 touchdowns.

“That’s one of the best performances in the last two weeks in college football history,” Meyer declared.

Just as important to Meyer — who will retire after his team plays in the Rose Bowl Jan. 1 — is the willingness Haskins showed to tuck the ball and run for tough yards down the stretch, which didn’t come naturally to the pro-style quarterback.

“How do you measure a quarterback? Obviously, wins. But can he get and will he get the first down for you?” said Meyer, who had promised to fly Haskins to New York himself if his quarterback wasn’t chosen as a finalist.

Like Barrett, his predecessor, Haskins showed poise beyond his years whether the offense was clicking or not.

Haskins said he knows Tagovailoa and Murray well from prep quarterback circles and considers them friends.

“Quarterbacks, we all are the alpha males, and we all compete against each other at all the camps, and we all know about one another,” he said. “Kyler coming out of high school was the best quarterback in the country. Tua was like a god. And to be able to be in the same conversation with them makes me feel like I put the work in to be considered the best quarterback in the country. I have much respect for those guys.”