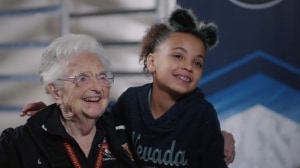 
Sister Jean’s never been one for surprises. It’s not that she didn’t like the adrenaline rush of an unknown celebration. Friends, family and colleagues could never pull one off — until the ripe age of 75, when Sister Jean first celebrated her birthday with the entire Loyola community. People came in droves.

“Now I kind of live for surprises,” Sister Jean told NCAA.com a day before she turned 100. “That’s what I like most about these days is the surprises and celebrating with the people I work with and the people I live with. And just have fun.”

The Loyola men’s basketball chaplain and college basketball icon turns 100 today, Aug. 21, and there’s excitement at the Lake Shore campus next to Lake Michigan. Outside Sister Jean’s office at the student union, “a new house is being put up.” Or at least, that’s how Sister Jean describes the large, on-campus birthday celebration, being prepared outside her office window.

She promised the event coordinators not to peek as she headed home Tuesday, her last night at 99.

Team of the Decade: Find where Sister Jean lands in the 64-deep bracket

Sister Jean’s place in college basketball history followed Loyola’s NCAA tournament run in 2018. Her friendly presence, like a fairy godmother on the sidelines, helped define the Cinderella team. Decorated in a maroon and gold letterman jacket, the devoted nun prayed before every tipoff and spiritually counseled members of the 15-man roster. She and head coach Porter Moser laid a foundation for success.

The cutest interview of March Madness

After five program appearances at the NCAA tournament, Loyola defeated No. 6 Miami (FL), No. 3 Tennessee, No. 7 Nevada and No. 9 Kansas State to ensure its first Final Four appearance since 1963, the national title year.

Being bound by a wheelchair never lessened her presence. Her smile attracted March Madness fans to the Ramblers. Her articulate pregame prayers, bugged by television broadcasts, silenced audiences. Her calming presence inspired nostalgia of long lost dinners with grandma.

Before there was Loyola basketball, Sister Jean faced the decision of retiring from Loyola in 1994. She decided to forgo the exit and begin her tenure with Ramblers athletics as an advisor to student-athletes. Becoming the basketball team’s chaplain came soon after.

Civil rights became a cornerstone of her ministry in the 1960s, within the same period of Loyola’s first, and only, NCAA national title in 1963. The significance of that Ramblers club is found in its racial makeup. They started four African-Americans in the title game. It would be 31 years until Sister Jean joined the Loyola basketball program, but the eventual union seemed ordained long before.

2020 NCAA Tournament info: Will Loyola Chicago return to the field of 68? 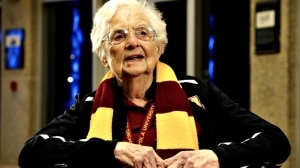 “I’ve been watching the NCAA for years and years and watching the playoffs,” she said. “I used to pick my own teams as they went along, and it’s interesting to me how the brackets have grown over the years.”

Loyola basketball, in turn, has changed with it. Cornerstone players of the 2017-2018 season in Marques Townes and Clayton Custer graduated last season.

Sister Jean has been told the new student-athletes are “fitting in just perfectly,” complimenting her optimism for opening night in November.

“If we stay healthy, then we a going to be really good,” she said. “So be sure to watch us.”