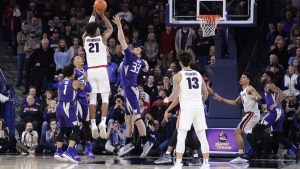 SPOKANE, Wash. (AP) — In the closing seconds of a tie game, Gonzaga guard Josh Perkins dribbled out high looking for somewhere to pass the ball.

He spotted Rui Hachimura near the free throw line.

“They left Rui open where he is automatic,” Perkins said.

Hachimura sank a turnaround jumper with 0.6 seconds left, lifting the top-ranked Bulldogs to an 81-79 victory over in-state rival Washington on Wednesday night.

“We wanted Rui to take that shot in that situation,” teammate Zach Norvell Jr. said. “He shoots that shot a lot.”

Washington missed a halfcourt try as the final buzzer sounded.

“It was crazy, but my teammates and coaches trust me.”

Norvell finished with 14 points, Corey Kispert added 13 and Brandon Clarke had 10 points and 11 rebounds for Gonzaga, which struggled against Washington’s zone defense.

Jaylen Nowell scored 26 for Washington (6-3), which was in the preseason Top 25 before losing at No. 8 Auburn. Matisse Thybulle added 18 points.

“We did a good job in the second half slowing the game down and finding the open man on offense,” Washington coach Mike Hopkins said. “We showed a lot of heart and a lot of toughness.”

The Bulldogs were held well below their season average of 98 points per game, which ranked second in the nation.

Hachimura, a junior from Japan who leads the team in scoring, had 18 points as Gonzaga took a 40-30 halftime lead.

Washington shot just 39 percent in the first period, while Gonzaga shot 41 percent and sank all 10 of its free throws.

Washington opened the second half with a 12-2 run, and Nowell’s 3-pointer tied the score at 42. Nowell followed with another 3 for a 45-42 lead, as Gonzaga made just one of its first 11 shots in the second.

The teams traded a flurry of baskets, and a pair by Clarke gave Gonzaga a 65-58 lead.

Nowell’s basket cut it to 79-75 with a minute left, and Thybulle’s bucket trimmed the deficit to two.

Nowell went to the free throw line with 9.4 seconds left and sank two to tie the score at 79, setting the stage for Hachimura’s dramatic shot.

Washington outscored the Zags 49-41 in the second half.

“We probably didn’t get enough stops at the end,” Norvell said.

A clutch win over a good team should benefit the Zags.

Gonzaga shot only 42.9 percent from the field, while Washington made 47.5 percent in a rugged game.

Washington: The Huskies held their previous six opponents under 70 points. … Thybulle was the only player in the nation averaging at least 2.5 blocks and 2.8 steals per game. … Noah Dickerson averaged 20 points in his previous four games. … The Huskies were averaging seven blocks per game, but got only three in this game.

Gonzaga: The Zags are 36-18 against members of the Pac-12 under Few. … Gonzaga entered with four starters averaging in double figures, and two more scoring better than eight points per game.

Gonzaga gets a major test when it plays No. 7 Tennessee in Phoenix on Sunday.

This article was written by Nicholas K. Geranios from The Associated Press and was legally licensed through the NewsCred publisher network. Please direct all licensing questions to legal@newscred.com.