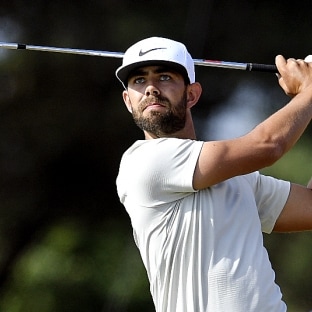 Not a bad debut.

Making his first career appearance at a major on Thursday at Carnoustie, former Minnesota Gophers golfer Erik van Rooyen carded a 4-under 67 in Round 1, putting him in a three-way tie for second at The British Open in Scotland, one stroke behind leader Kevin Kisner.

“It is a major but my mindset today was I’ve played a lot of golf this year already,” he told the Agence France-Presse. “I was quite comfortable.”

RELATED: Follow the live leaderboard from the 2018 Open Championship

Back in Minnesota, John Carlson — the Gophers’ director of men’s golf — was watching proudly, at least for van Rooyen’s final three holes. Carlson woke up well before 5 a.m., and still was able to catch just the tail end of the University of Minnesota alum’s round.

“If I didn’t have an 11-month-old I would’ve been up all night,” Carlson joked.

Thursday was exciting not just for Carlson and his family, but the entire Gophers program. The 28-year-old South African played for Minnesota from 2009-13, and is still very much involved with the program. Van Rooyen’s wife, Rose, is from Woodbury — the two met when he was in college. Van Rooyen was back in Minnesota for a few weeks this winter. During that time he practiced indoors with the Gophers and attended a Minnesota high school coaches clinic.

. @FredVR_ is one shot off the lead after his second birdie of the day

“He is very generous with his time, with giving back to us and our program,” Carlson said. “He couldn’t be a closer friend.”

Van Rooyen’s success on Thursday brought plenty of recognition for the program. Nearly every time van Rooyen’s name was mentioned on the Golf Channel during the opening round, “the University of Minnesota” quickly followed.

“That exposure helps so much,” Carlson said. “We recruit internationally as well as domestically, and a lot of the English players that are watching the telecast, that’s the biggest event for them for the entire year. And to be able to see a place that they could go play and develop their games as collegiate players, that’s pretty special. Erik obviously did that.”

BEFORE THE TOUR: Rickie at Oklahoma State | Spieth at Texas | JT at Bama

As a Gopher, Carlson said “Freddie” — short for Fredrick — was “more humble and honest than anyone would ever imagine,” something he said is still true to this day. Individually, van Rooyen placed second in the Big Ten tournament in 2013, finishing only behind Illinois junior Thomas Pieters, a Belgian who played for Europe in the Ryder Cup in 2016 at Hazeltine and is tied for 18th at The Open at 1-under.

“Being with Erik on the golf course and being able to see those two come down the stretch, I knew that those two were poised to become tour players one day,” Carlson said.

Van Rooyen’s ascension has been steady. The 2012 Minnesota State Amateur champion won twice last season, once on the Sunshine Tour — a pro tour based in Southern Africa — and once on the Challenge Tour — Europe’s second-tier tour. Van Rooyen finished third on the Challenge Tour money list last season, earning a spot on the European Tour this season. Van Rooyen earned his spot at this year’s Open by finishing second at the Joburg Open in South Africa in December.

“I knew if that ever happened, it would catch up with his putting, and, well, those scores are proving that this entire year,” Carlson said.

Carlson noted some may think van Rooyen’s round Thursday came out of nowhere, but he has finished in the top 10 in four European Tour events already this season. That includes a fourth-place finish at the Irish Open two weeks ago, an event with a strong field that van Rooyen led by four shots through 54 holes before carding a 2-over 74 in the final round.

“He was ready to win … it just didn’t happen in that final round, but I’m not surprised to see him in the position that he’s at,” Carlson said. “He’s also one that, if it doesn’t happen this week at The Open, he has a mind-set that it’s going to happen. I just hope he can go out there and get himself in position again, because I know he learned a lot from the Irish Open.”

Carlson saw van Rooyen reaching these types of heights in his pro career, largely thanks to his drive and work ethic. Van Rooyen, Carlson said, is someone who sets goals, then achieves them. He wanted to get onto the European Tour, and did that. The eventual goal, Carlson said, is for van Rooyen to earn his PGA Tour card.

“I think that’s in the cards,” Carlson said.

As for this weekend, Carlson said he’ll be “on pins and needles” watching van Rooyen, as he always is when he’s watching his former players.

“We’re rooting for him,” Carlson said, “and we’re just so happy at Gopher golf.”

This article is written by Jace Frederick from St. Paul Pioneer Press and was legally licensed via the Tribune Content Agency through the NewsCred publisher network. Please direct all licensing questions to legal@newscred.com.