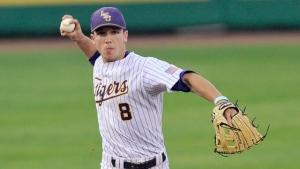 The 2019 MLB postseason kicks off Tuesday, Oct. 1 with the first of two Wild Card games. The NL’s Washington Nationals and Milwaukee Brewers will play Tuesday at 8:08 p.m. ET on TBS while the AL’s Tampa Bay Rays and Oakland Athletics meet Wednesday at 8:09 p.m. ET on ESPN. Click or tap here for the full postseason schedule.

Below, we highlight every former college baseball player listed on each playoff team’s active roster to close out the regular season on Sept. 29. Postseason rosters will be cut down to 25 per team prior to each series.

First, here are some general notes:

Here is a breakdown of former college baseball players by playoff team. Positions and colleges were taken from MLB.com’s official active rosters at the end of regular season play on Sept. 29.

*Players cut from postseason rosters for each round will be noted with an asterisk.

Nationals reliever Sean Doolittle and first baseman Ryan Zimmerman were teammates at Virginia for one season in 2005 when the Cavaliers made a run to NCAA regionals. Zimmerman played in 174 games over three years at UVA (2003-05), finishing with 140 RBIs, 128 runs and 63 extra-base hits. Doolittle (2005-07), a two-way player, was ACC Player of the Year in 2006 and finished with 22 victories on the mound and 22 homers at the plate.

Stephen Strasburg was a two-time All-American pitcher at San Diego State and set the school record with a 1.59 career ERA. He was the No. 1 overall pick in 2009.

Rookie second baseman Keston Hiura won the NCAA batting title in 2017, hitting a whopping .442 with a .567 on-base percentage at UC Irvine. He was selected ninth overall in the 2017 MLB Draft and has 19 homers in just 84 games as a Brewer.

ALL-STARS IN COLLEGE: Where the 2019 MLB All-Stars went to school

Matt Chapman, a 2018 Gold Glove winner and 2019 MLB All-Star, hit .312 with 24 extra-base hits his junior season at Cal State Fullerton before being selected 25th overall in 2014. He finished his Titans career with two All-Big West team honors and an ABCA Gold Glove Award.

Lefty Sean Manaea was a three-year standout at Indiana State and closed out his collegiate career with 290 strikeouts, third most in ISU history.

Mike Zunino’s 2010-12 run at Florida was littered with accolades, including two first-team All-American selections, a Dick Howser Trophy, a Johnny Bench Award and an SEC Player of the Year honor. The catcher hit .327 with 47 homers and 175 RBIs in 193 games as a Gator.

Ryan Yarbrough is one of three Old Dominion Monarchs on playoff teams, and the most recent to come out of college. The southpaw was 10-11 with a 3.89 ERA and a save from 2013-14 at ODU.

Gerrit Cole (UCLA) and Justin Verlander (Old Dominion) are both top contenders for the 2019 AL Cy Young Award. They also both happen to be in the Astros’ starting rotation. Cole ended his Bruins tenure ranked second in career strikeouts in UCLA history with 376. Verlander is No. 1 on ODU’s strikeout list with 427.

Aaron Judge has won both a college and Major League Home Run Derby. Five years before his victory at the 2017 MLB All-Star Game in Miami, Judge won the 2012 TD Ameritrade College Home Run Derby in Omaha as a member of Fresno State. He was a two-time All-WAC first-teamer before the Yankees drafted him in 2013.

DJ LeMahieu was named a starter as a true freshman in 2008 and batted .344 in two seasons with LSU. The three-time MLB All-Star was a member of the 2009 College World Series All-Tournament Team after leading the Tigers to the program’s sixth national championship.

Walker Buehler was a 2014 College World Series champion at Vanderbilt as a sophomore. The righty earned one win in Omaha during the run, no-hitting UC Irvine in 5.1 shutout innings.

Chris Taylor (Virginia) and Justin Turner (Cal State Fullerton) were named co-NLCS MVPs in 2017, the first of two straight pennants won by the Dodgers. Taylor had a .400 career batting average in NCAA tournament games, including a walk-off single in 2011 Super Regionals to send the Cavs to the CWS. From 2003-06, Turner was a key cog in the Titans’ lineup, finishing with a .328 career average.

Like LA’s Buehler, Braves shortstop Dansby Swanson was a huge part of Vanderbilt’s run to the 2014 College World Series title. Swanson was named the tournament’s Most Outstanding Player with a .323 average, three doubles and five runs in Omaha. He was selected No. 1 overall by the Arizona Diamondbacks in 2015 after three seasons at Vandy.

Josh Donaldson was a catcher, along with third base, back in his playing days at Auburn (2005-07). As a sophomore, he led the Tigers with 10 homers while throwing out 15 of 38 attempted base stealers at catcher.

Paul Goldschmidt slugged 36 home runs and drove in 170 RBIs in three years at Texas State, both program records. Thirty-five of those homers came in his latter two seasons. In 2015, Goldschmidt became the first former Texas State baseball player to have his number retired.

First-time 2019 MLB All-Star Paul DeJong was a fixture all around the diamond for Illinois State from 2013-15. The Cardinals shortstop split time at shortstop, second base, third base, catcher and right field after redshirting his 2012 freshman season. In 2014, he led the MVC with 14 homers.