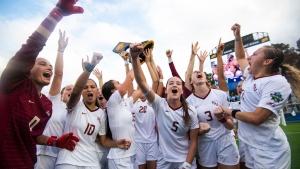 
Florida State returned to the pinnacle of women’s college soccer in 2018, winning its second national championship in five years. After finishing as national runners-up in 2007 and 2013, the Seminoles would not be deterred in either of their next two trips to the College Cup final.

Coach Mark Krikorian’s side starts at No. 1 in the United Soccer Coaches preseason poll, returning two second-team All Americans and 10 players overall who appeared in at least 20 matches last season.

The Noles’ chance to become the second program since 1982 to win back-to-back titles is just one theme to take note of before the women’s college soccer season commences on Aug. 22. Here’s everything you need to know before this season’s kickoff.

Behind Florida State in the Aug. 5 release of the preseason poll is national runner-up North Carolina, Stanford, UCLA and Southern California in the top five.

Coming off appearances in the 2018 Women’s College Cup, Florida State, North Carolina and Stanford each pick up where it left off at the end of last season.

The Tar Heels return 12 players with 20 or more appearances while the Cardinal have a dozen returners of their own with double-digit appearances, including reigning Hermann Trophy winner Catarina Macario.

Six of the eight quarterfinalists from the previous NCAA tournament are represented inside the top 10. Baylor and Wisconsin reached the 2018 season’s penultimate weekend and will start ranked No. 14 and No. 16 respectively.

The ACC leads all conferences with seven ranked teams. Among them, three are ranked in the top nine.

With eight conferences garnering at least one selection, below is each league’s representation in the preseason poll.

North Carolina’s 21 national championships are in an echelon of its own. The program is an outlier with 18 more titles than any other side since the inception of the sport’s NCAA sponsorship in 1982.

The Tar Heels reached the College Cup final for the first time since 2012 last year and were denied title No. 22 in a 1-0 loss to Florida State that extends their title drought to six years.

But UNC returns in 2019 with history on its side. Coach Anson Dorrance is back for season No. 41 in Chapel Hill with his team having captured championships in 1989,1999 and 2009.

While the number seven is often associated with good fortune, the Tar Heels’ decorated past suggests that numbers ending in 9 are linked to prosperity.

Both the Broncos and Aggies were top 16 seeds in the 2018 NCAA tournament, advancing to the second and third rounds respectively. On opening night, they’ll provide a matchup of top-15 teams to begin the season in Santa Clara.

Florida State knocked off Penn State and Stanford in consecutive postseason games a year ago to reach the College Cup final. While the Cardinal and Nittany Lions were denied a 2018 meeting in Cary, the opening weekend of 2019 features a must-see top 10 showdown in State College.

The Nittany Lions will play at Jeffrey Field 10 times during the 2019 regular season!
Check out the full 2019 schedule 👉https://t.co/we5f5rOYBV#WeAre pic.twitter.com/BT0KmFuB8c

Georgetown’s only loss of 2018 came against North Carolina in the College Cup semifinal. To sustain the longest-active home-winning streak in Division I, it will have to get by North Carolina State.

The Hoyas put their 24-game home-match winning streak on the line against the Wolfpack.

Featuring the ACC and Big 12, Virginia welcomes top-15 opponent West Virginia to Charlottesvile. The Mountaineers come to Klöckner Stadium as part of season-opening seven-game home stand for the Cavaliers.

In a rematch of the 2018 College Cup final, defending champion Florida State journeys to Chapel Hill for its regular season meeting against North Carolina. The Seminoles and Tar Heels played three times in 2018 with FSU winning twice while all three matches were decided by one goal.

Four of the United Soccer Coaches poll’s top five teams produced top-scoring offenses in 2018. UNC and Stanford reached the College Cup while Southern California and UCLA were two of the final 16 teams remaining.

As college soccer adjusts to a more defensive approach, here are three programs that have a knack for finding the back of the net.

South Florida netted an impressive 54 goals a season ago, despite only playing 19 matches. The Bulls reached the second round of the NCAA tournament behind a 20-goal campaign from Evelyne Viens.

Now a senior, Viens returns along with USF’s top four scorers from 2018. With strong offensive depth, the Bulls are in position to reach the postseason for the fifth time in six seasons.

Keidane McAlpine’s side played five matches in which the Trojans scored at least five goals. USC tallied 57 goals in 22, tied for the third-most last season.

Southern California returns Penelope Hocking, Savannah DeMelo and Tara McKeown (29 combined goals) to form one of the most dominant attacking forces in the Pac-12 and Division I.

The Trojans’ @Savannah_DeMelo and @kayliecollins_ are on everyone’s radar for the top award in college soccer this season!
Release: https://t.co/Sr4axcnnKV#FightOn | #FocUSed pic.twitter.com/h55Knn2vVr

After tying for the Division I lead with 61 goals in 2018, UCLA has four of its top five scorers back from a season ago.

The Bruins reached the NCAA tournament quarterfinals and could potentially advance further with seven players returning who netted at least of four goals last season.

Below is the postseason schedule for the NCAA tournament, including the 2019 Women’s College Cup in San Jose, Calif.  Avaya Park last hosted in 2016 when Southern California defeated Stanford 3-1 for the program’s second title.

The 64-team field, top 16 seeds and bracket will be revealed on Nov. 11 during the selection show, streamed on NCAA.com.

Matches begin with the first round, starting on Friday, Nov. 15, continuing through the College Cup semifinal on Dec. 6 and final on Dec. 8.

Below is the full schedule. It will be updated with broadcast information and live streaming links when those are available.

The 2019 women’s soccer season kicks off on Thursday, Aug. 22. Here is a complete list of notable matchups scheduled for the opening weekend.