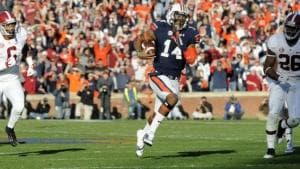 
College football isn’t truly here until the AP preseason poll is released. But is that poll really a good indicator of how the season will go?

After looking at AP rankings from 2010 through 2018, we’re fairly sure that answer is no.

COACHES POLL: Clemson is No. 1 in first Coaches Poll of the 2019 season

Over the past nine years, 225 teams have been ranked in the preseason Top 25. Of those, 139 were still ranked in the final poll. That’s just 61.8 percent. And even the ones that stayed ranked rarely held their position.

That also means that 86 teams that were not ranked in the preseason poll ended up in the final Top 25.

And then there’s the flip side: The falls from grace.

Since 2010, 45 teams have started the season in the Top 5. Of those, seven were unranked at the end of the year:

None of those were more surprising than USC in 2012.

After returning 18 starters (including 13 All-Pac-12 players) from a team that went 10-2 and finished No. 6 in the AP poll, the Trojans earned the No. 1 spot in 2012’s preseason rankings. Then they went 7-6, highlighted by losses to No. 21 Stanford and unranked Arizona. USC became the first team since Mississippi in 1964 to start No. 1 in the AP poll and finish unranked.

Our two sets of variables used for this were the preseason top 25, and the final top 25. And their correlation coefficient was an insignificant 0.29 (on that scale of -1 to 1), reinforcing what the raw numbers seemed to show: The two are just barely related.

Preseason polls are, at best, really good guestimates. Throughout the course of the season, teams will suffer injuries, watch highly-touted players fall short of expectations, unheralded players become stars, veterans have breakout seasons, and many more unpredictable storylines. With 130 schools in the FBS, it would be an extremely impressive feat to predict all the chaos that will unfold in a 16-week season.

So, if your team is hyped up enough to land a Top 5 spot in the first AP poll of the 2019 season, maybe hold off on buying your CFP tickets for just a little while. And if you’re outside the Top 25, don’t give up hope. You never know.

If you want to take a look at past results yourself, here is a table of every team that has started the season ranked, and where they ended up in the final AP poll: