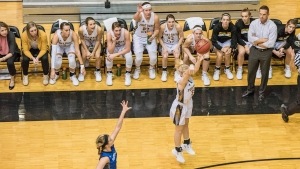 The DII women’s basketball top 25 made it through the first half of the schedule with a combined 17 losses. Those teams will be challenged early in 2019 to see if they can keep the winning ways rolling.

Here are the best matchups we have our eyes on in January:

The Bulldogs are a perfect 11-0 atop the DII women’s basketball rankings. Should they continue to reel off win after win, the Jan. 5 matchup against the Chargers will give head coach Mark Campbell a shot at his 600th career win. If Union wins that one, Campbell will be the fastest coach to 600 wins in college basketball history.

There are 11 undefeated teams remain in DII women’s basketball, and two of them lurk in the Pennsylvania State Athletic Conference. These two rivals are tied atop the PSAC West and this January matchup will set the table for the huge Feb. 23 rematch.

A top 25 matchup for an undefeated team is always intriguing, but a top 25 matchup on the road is even better. The Lady Buffs put their perfect record on the line in San Angelo, Texas against an 8-1 Angelo State team that hasn’t lost in Lone Star Conference play and is hoping it remains that way. Should the Lady Buffs survive, they’ll look to stay perfect once again on the road in a huge matchup against an Eastern New Mexico team receiving votes.

The Tigers January Mid-America Intercollegiate Athletics Association slate has three top 25 opponents on it. It begins Jan. 3 against the defending national champion, and No. 15, Central Missouri Jennies in Warrensburg, Missouri. They then have back-to-back top 25 games, hosting No. 22 Central Oklahoma on Jan. 12 before heading to Emporia, Kansas in a rematch against No. 23 (tied) Emporia State. Fort Hays State received a first-place vote in the recent poll. If it makes it through this part of the schedule with its perfect record still intact, it’s sure to have a few more.

This Panthers team is looking like the best one yet during the Molly Miller era, and that’s an impressive statement for a head coach that is currently 124-16 since taking the helm in the 2014-15 season. Lewis is also a formidable opponent with Jessica Kelliher giving opponents a matchup nightmare averaging nearly a double-double a night. This will be a big one for the Great Lakes Valley Conference.

No. 9 USciences at No. 19 Thomas Jefferson

This matchup of undefeated CACC teams ends an absolutely brutal stretch for the Devils. USciences closed 2018 against undefeated Bentley and No. 25 Stonehill before resuming play in its conference against undefeated Jefferson. The Rams haven’t played a close game since their season opener, so this will be a good test.

Make that 277 weeks in the WBCA Top 25 for @LadyHornetWBB as they remain at #24 this week. https://t.co/Fn12w6DCwI pic.twitter.com/sVhRhdhOHi

The Turnpike Tussle is always a fun one. Last year, the 100th meeting of the Tussle, Emporia State handed Washburn its first MIAA loss of the season. Though Washburn is off to a rough start overall, the Ichabods are perfect thus far in conference play and hope to stay that way against a ranked foe.

*All records are prior to winter break as of December 28.

MORE: Programs with the most titles | DII women’s basketball news