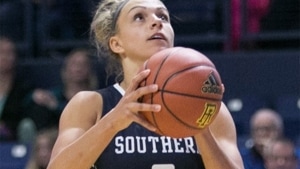 Have yourself a day Kiana Steinauer.

In fact, the Southern Connecticut State junior forward put up enough numbers to have two good days. Steinauer became what is believed to be just the second DII women’s basketball player to score 30 points and pull down 30 rebounds in the same game.

Let’s take a look at how it went down.

Steinauer became just the 13th player in DII women’s basketball to have a 30-rebound performance, grabbing 31 in total. Most impressively, Steinauer out-rebounded Concordia all by herself, 31-29.

Kiana Steinauer #2 has her 24th rebound of the game, it’s a new SCSU record!! pic.twitter.com/nMEsj0uiAE

The 6-0 forward dominated both ends of the floor, crushing the program record of 24 total rebounds in a game. She nearly broke the record on the defensive end alone with 23 rebounds, tying the program mark for total rebounds she set last season while adding eight more off the offensive glass.

Her 33 points nearly outscored her opponent

Steinauer was red-hot from start to finish. She scored a season-high 33 points while shooting a remarkable 80 percent from the floor, converting 12-of-15 shots. She nearly beat Concordia all by herself, as the Owls held their opponent to just 48 points.

.@ESPNSCTop10 : @SCSU_Owls Kiana Steinauer just turned in the second 30-point, 30-rebound game in @NCAADII women’s basketball history (unofficially). She finished w/33 points and 31 boards in a 96-48 win against Concordia. This is her 31st rebound. pic.twitter.com/Rd2ITSdHRZ

She was on fire from everywhere, going 4-for-6 from 3 and hitting five free throws as well. Steinauer is the Owls second-leading scorer on the season, bumping her average to 17.6 points per game. It was her first 30-point performance of the year, with her previous high being 25 back in the second game of the season against Bridgeport.

The last time there was a 30-rebound performance in DII women’s basketball was Dec. 17, 2006, by Destiny Betts of Benedict. Here’s where Steinauer matches up in the best rebounding single-game performances in DII history.