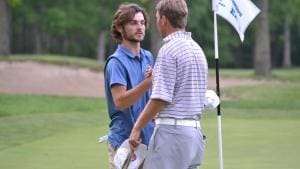 Lincoln Memorial took the first two points, with Sam Broadhurst having yet another strong round. Carlos Bustos, Giovanni Manzoni, and Jorge Villar were too much for the Railsplitters, however, winning the final three points by 17 strokes.

This piece was contributed by Adam Zundell

DANIELS, W.Va. – Lincoln Memorial scored a pair of upsets on Thursday to advance to the championship match where they will take on defending champion, Lynn.

The championship match will tee off at 9 a.m. on the Cobb Course at The Resort at Glade Springs.

LMU defeated top-seeded and No. 1 ranked Barry, 3-2, in the quarterfinals, and then defeated Florida Southern in the semifinals by the same score. The Knights advanced to the championship with a 4-0-1 win over Cal State Monterey Bay and then finished off West Florida, 4-1, in the semifinals.

In Lincoln Memorial’s quarterfinal upset of Barry, Sam Broadhurst shot a week-low 64 to win his match by nine shots. After being tied up just one through 14 holes, Hamish McColm notched an eagle that propelled him to a victory in his match. Dan Bradbury had just a one-shot lead in his match going to 18 but made a birdie while his opponent made a double bogey to secure the upset.

Florida Southern won its match over Trevecca Nazarene, 3-1-1, and Lynn cruised to a 4-0-1 victory. West Florida was in a tight match with after nine holes, but won at all five positions over Arkansas Tech to win 5-0.

In the semifinals, LMU and Florida Southern were tied 1-1 after two matches as medalist Michael VanDerLaan rallied from three down in the final nine holes to win by three and salvage a point for the Mocs. The third pairing proved to be pivotal in the final outcome due to large leads for both teams in the final two groups. Tied through 15 holes, Luke Haries gained two shots on the final three holes, including a birdie at the 18th, to put LMU up 2-1.

In the other semifinal, Carlos Bustos and Agustin Errazuriz put the Knights up 2-0 with victories in their duals. Carlos Marrero salvaged a point for the Argos, but Jorge Villar and Tomas Gana closed out their matches to post the win.

Check back here for scores, schedules and updates from the championship match on May 24.

Lynn, which drew the No. 2 seed in the South Region, is the reigning national champion. It defeated West Florida 3-2 at Muscle Shoals, Alabama for the 2018 DII men’s golf team title. Here is a complete list of the DII men’s golf championship finals results.