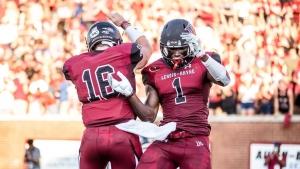 
Week 9 of the DII football season opened with the first Super Regional rankings of the season, giving us some initial insight into how the 2019 bracket could shape up. Week 9 closes with seven pivotal games that could shake up those regional rankings by next week.

Here’s where you can find the DII football top 25, complete schedule, top games previewed and how to watch the three DII football showcase games of the week.

This is a battle for PSAC East Division supremacy. Kutztown earned the No. 1 spot in Super Region One and a win could lock up a spot in the PSAC championship game on Nov. 16. The Golden Rams came in at No. 6, and a victory here will lead to a wild finish in the East, especially with Shepherd coming on strong.

West Virginia State opened as the fifth-ranked team in Super Region One and gets to take on its rival Charleston as a follow-up. This game will have plenty of action as two of the premier DII football passing attacks are on display. Charleston’s Brant Grisel and Mike Strachan made our 15-players-you-should-know list as one of the best quarterback-receiver duos in DII. The Yellow Jackets Austin Hensley has a stable of pass catchers he chucks it to, so this should be an intense, high-scoring affair.

Notre Dame will be put to the test, needing to win out if it wants to try for the No. 1 seed it had last season. Frostburg State has shown little trouble adjusting to its first year of DII football and has won seven games in a row, dropping 42 points in each of its last two games. The Falcons head to unfamiliar territory to try to protect their undefeated season.

Wingate and Lenoir-Rhyne battle for the South Atlantic Conference in one of three DII football showcase games this weekend. Both teams are undefeated, with the winner essentially having first dibs on the 2019 conference title.

Grayson Willingham leads the Bears offense, and he and his favorite target Dareke Young are a duo to watch. Jaquan Artis and Dan Louba lead an aggressive defense with 17.5 combined sacks, but Kyle Duggar may be the X-factor. He can turn the tide with a big pick or a punt return to the house.

For Wingate, Domineke McNeill and Nijere Peoples form a tough tandem out of the backfield with 1,238 combined yards and 13 touchdowns between the two. Crocker Shaw paces the offense, throwing 12 touchdowns and just two interceptions. Lenoir-Rhyne won both games last season, including knocking the Bulldogs out of the DII football championship, so there won’t be any love lost on the field Saturday.

UNDEFEATED TRACKER: Follow all 14 perfect teams, and what they have left

Augustana entered the regional rankings in the final spot for Super Region Four. The Vikings’ first task will be the 5-3 Golden Bears. Augustana’s quarterback Kyle Saddler will have to deal with Chris Garrett — one of the best pass rushers and defenders in DII — in order to get the much-needed win.

The Great American Conference has three ranked football teams, but Ouachita Baptist will have its hands full with the best one not in the top 25. Southern Arkansas is 7-1 and was blanked earlier this season by Harding. The Muleriders will be looking for a big signature win to prove they belong in the Super Region Three conversation.

West Texas A&M is on the outside looking in for the Lone Star Conference, but it doesn’t diminish the Buffs strong season so far. Texas A&M-Commerce has to be careful in this big LSC showdown looking to keep pace in a Super Region Four with very little room for error.

Lions’ quarterback Miklo Smalls has put together an exciting debut, throwing for 1,691 yards with 18 touchdowns and just five interceptions. West Texas A&M has a balanced attack on the ground and through the air. On paper, these teams are about as evenly matched as it gets: The Lions score 38 points per game and allow 24, while the Buffs score 33.5 points per game and allow 24.8. West Texas A&M has a big opportunity to climb the Super Region ladder with a win.