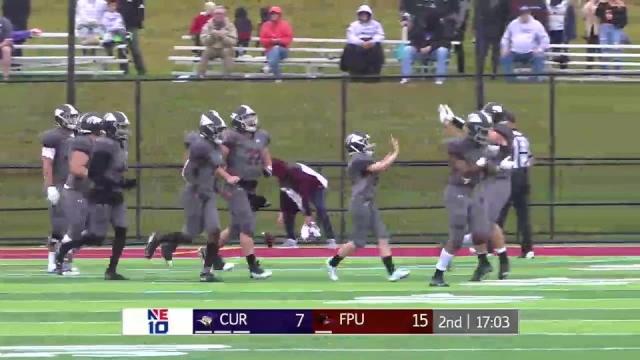 
The top 25 of DII football absolutely dominated Week 2, going a combined 24-1 while winning their games by an average of nearly 27 points each. They won’t have that luxury this week as two top 25 showdowns and a couple of huge conference rivalries highlight the Week 3 schedule.

Let’s take a look at the weekend ahead and what you should keep your eyes on in Week 3.

This battle of G-MAC powers has plenty of postseason implications on the line already in Week 3. With Findlay, Ohio Dominican, and Tiffin all clumped at 1-1 entering conference play, falling to two losses could be pivotal come selection time.

Findlay boasts the top scoring offense in the G-MAC, but the interesting matchup will be on the ground. The Oilers reel off a conference-best 203.5 yards per game, while the Panthers have the second-best rush defense in the conference, allowing 180.5 yards per game. Findlay’s pass defense will have to be at its best to try and slow down the duo of Evan Ernst and Devanaire Conliffe, who are both near the top of the G-MAC leaderboards early on in 2019.

These teams are evenly matched in the air game, but Findlay’s advantage on the ground could control the tempo and lead to a win. You can be sure Ohio Dominican will do all they can to ensure that the Oilers don’t ruin its homecoming weekend and leave with a win.

The story here is Bryce Witt. One of our Harlon Hill candidates on our preseason watchlist, the Hawks quarterback erupted for 359 total yards and eight total touchdowns in leading Chowan to its first victory of the season last week. The Hawks have one of the best offenses in the nation when it’s clicking, but need every win they can get in a stacked CIAA with Bowie State, Virginia Union, and Fayetteville State all looking tough this year. A win in their CIAA opener would be huge in the long run.

No. 18 Wingate will have its hands full with Carson-Newman. The Eagles were impressive in taking down West Florida in its season opener last week and will look to make a statement in its South Atlantic Conference opener against a Wingate team that has become DII football tournament regulars of late.

It’s the Gulf South Conference opener for both teams. It’s also a showdown between the conferences top-scoring offenses, with Valdosta State dropping 43.0 points per game and West Alabama just behind at 41.0. This is the Blazers conference for the taking, and West Alabama — who’s been to the DII football championship two years running — can send a huge message in taking down the reigning champs at home and ending the Blazers 17-game winning streak.

Just to make things a little more exciting: Valdosta State’s last loss came in 2017. At home. Against West Alabama. Yep, all eyes will be on this one.

Another huge conference rivalry gives the Eagles a chance to re-enter the top 25. Ashland opened the season at No. 23, but after a season-opening loss to a very tough Indianapolis team rebounded with a win over Walsh last week. That gave the Eagles program 499 wins in school history, and capturing No. 500 in their GLIAC opener against the reigning national runners-up would be something. The only problem is that Ferris State looked a lot like the Ferris State of old late last week and may be just getting started.

No. 23 Harding will have a big challenge this weekend against Southern Arkansas. The Muleriders are off to a 2-0 start and are riding a DII-best 17-game home winning streak. The last time the Muleriders lost at home was in 2015 to none other than Harding. A loss could bump Harding from the top 25 and propel Southern Arkansas to the top of a very tricky Great American Conference.

The Rocky Mountain Athletic Conference has two teams in the top 25 and they face each other this coming weekend. No. 17 Colorado School of Mines heads to No. 9 CSU-Pueblo in a showdown with plenty at stake. This one features the RMAC’s best scoring offense and defense (the Orediggers) against the RMAC’s second-best scoring offense and defense (the Thunderwolves). Mines football took the game last year, so you can expect CSU-Pueblo to be looking to settle the score, especially with its 15-game home winning streak on the line.

They’ll be plenty from our pre-season Harlon Hill watchlist on full display this weekend. Be sure to check back Sunday to see who had the best stats from Week 3.