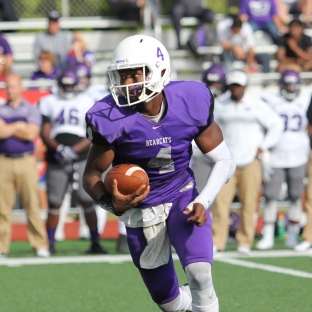 
The Southwest Baptist Bearcats football team is enjoying its finest season in the history of their program. This past weekend, behind a dominating 45-22 victory over Missouri S&T, the Bearcats won their eighth game of the season, besting 2010’s seven-win season, establishing a new program record. This has been the trend for the Bearcats 2016 season, as it has seen plenty of firsts.

Last season was head coach Robert Clardy’s first season at the helm, but he has been part of the program for many years, first as a one of the program’s all-time great quarterbacks and then as an assistant. He led his team to a mere 4-7 record, however, they finished strong, winning consecutive games to close out the year by a combined score of 108 to 61.

“Finishing with those two wins was definitely a boost going into winter conditioning and spring ball,” Clardy said. “We were competing in games last year but just weren’t finishing. We learned a lot about our team’s fight and character when we lost to conference champs [Indianapolis] by two and then losing back-to-back one point games. They kept grinding knowing great things would happen if they stayed together and trusted the process. Returning 22 starters from last year’s team is another reason we had high expectations going into this season. Those returners were hungry and battle-tested and didn’t want to just compete in games. They want to win.”

Not much was expected from the Bearcats nationally, as they hadn’t won more than four games since 2011. They were selected to finish fifth in the Great Lakes Valley Conference. Instead, SBU reeled off five straight wins to open the season, and on Oct. 3, found themselves nationally ranked for the first time in program’s history, coming in at No. 20.

“It means a lot for me to see this program have success,” Clardy said. “SBU takes a lot of pride in their athletics and through all the tough years we’ve had, the support from the university and community never wavered.  Our coaching staff has done a great job recruiting young men that want to be successful not just on the field, but in the classroom and in their community.  I’m so proud of our guys and what they’ve accomplished so far.  Our plan this year was to take it one week at a time; to get better each day than we were yesterday and be 1-0 at the end of the week.  Making the playoffs would be huge for this program and our supporters.  Achieving another milestone that’s never been reached in our program history would be a special thing.”

The Bearcats have been led by an explosive offense, one that finds themselves 15th in the nation scoring at 40.7 points a game. The attack is led by junior running back Bubba Jenkins and dual-threat quarterback — and reigning GLVC and Hero Sports Freshman of the Year — T.J. Edwards.

Jenkins posted the fourth-best single-season rushing total in SBU history in 2015 and has already surpassed that mark this season with two games left. Averaging 136.4 yards a game, good for fourth in the nation, Jenkins should establish new school records by season’s end.

“Last season Bubba was our first 1,000 yard rusher at SBU since 2003,” Clardy said. “We knew we were going to have to run the ball well with a true freshman at quarterback to take the pressure off of him and Bubba answered the call.  This season Bubba and our run game have taken a lot of stress off of TJ so he doesn’t have to force the issue and make every play. TJ has developed and matured into a great leader on this offense and can be a very lethal weapon in both the run and pass.  Both complement each other and have been the motors that get us going on game day.”

Edwards’ progression has shown 2015 was just touching the surface of his abilities. The sophomore is on pace to establish the new SBU single-season mark for touchdowns. Edwards already has 2464 passing yards and 26 passing touchdowns, while adding 569 yards rushing and ten more touchdowns on the ground.

“God gave me the ability to do both, so I enjoy making plays with both my arm and my feet,” Edwards said. “Coach allows me to facilitate the offense and read the defense. I can extend plays with my feet, and if nothing is there, I can take off and run which puts the defense in a bind.”

He knows that having Jenkins alongside him makes it a long day for any defense. The two have relished the opportunity, and instead of fighting for carries, they make for a dangerous duo coming out of the backfield.

“I love having Bubba next to me,” Edwards said. “We can rely on each other, and know that either way the defense has a tall task of stopping both of us for the entire 60 minutes.”

While the defense isn’t tearing up the national charts, the unit has helped SBU maintain a point differential of +14 this season, leading to their 8-1 record, good for second place in the GLVC and third in Super Region Four. Senior defensive end Via Manuma is 11th in the nation with 11.5 sacks and senior defensive tackle Vice Epenesa, a Preseason All-American, has tacked on four sacks of his own.

“Having those two on the defensive line definitely make it tough on any offense,” Clardy said. “Both bring different things to the table in regards to game plan so it’s tough for our opponents to key on just one. Via has been doing a great job getting after quarterbacks and not allowing them to get comfortable in the pocket. Vice is a physical specimen that can create havoc with his strength and size on the interior.  I’m sure glad they’re on our side and we don’t have to game-plan against them.”

While words like postseason and playoffs are suddenly becoming a reality, this team does not forget where they came from. They want to continue this magical season of firsts, and see just how far they can go, but they know it’s important to stay grounded and not get too far ahead of themselves.

“We are playing with a lot of confidence,” Edwards said. “Every time we step on the field we want to be better than yesterday. We don’t want to look too far ahead, we want to be 1-0 each week. The team is really close this year, more of a brotherly bond. We don’t have any individuals on the team, but everyone is willing to help each other out – help their brothers out.”