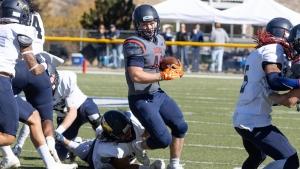 DII football stats: Here are the best performances from Week 9


Week 9 of the DII football season was another week of big numbers from the top 25, especially from the running backs. Four rushers broke the 200-yard mark this week with Colorado School of Mines’ Michael Zeman piling up 386 total yards.

WEEK 9: Full schedule, scores and top games | How the undefeated teams fared, and who they have left

Let’s take a look at the best individual performances and team stats from the weekend.

2, Part I — The number of pick-6 interception returns for Tarleton State’s Prince Robinson. He had a big day on defense but it was a combined effort in the Texans 66-7 win over Midwestern State.

2, Part II — Shutouts from the top 25 this week. No. 2 Ferris State struck first with a 52-0 victory over Michigan Tech, but it was No 14 Northwest Missouri State who had the big win of the day, blanking Northeastern State, 79-0.

3 — Top 25 teams that lost this week, one coming in upset fashion. No. 8 Indianapolis saw its perfect season come to an end as Lindenwood topped the Greyhounds, 34-27. Lenoir-Rhyne handled Wingate and Kutztown defeated West Chester in two top 25 battles on Saturday.

23  — Consecutive wins by Valdosta State — the longest current winning streak in DII football. With the Blazers on bye in Week 9, they’ll have to wait another week to set the Gulf South Conference record. The Blazers’ home winning streak is at 12, tying them for second with Lenoir-Rhyne right behind Notre Dame (OH) and Tarleton State by one for the longest current streak in DII.

26.6— Average margin of victory for the 21 top 25 teams that won on Saturday, down from last week’s 29, which was the largest number of the season. Northwest Missouri State had the largest victory at 79 points, but six top 25 teams in total won by 45 or more points. West Florida and Slippery Rock had the narrowest margin of victory amongst the top 25, winning by three points.

33 — Consecutive wins in the Northern Sun Intercollegiate Conference by Minnesota State. The Mavericks scored 62 points this week, one week after setting a program record with 81 points in a victory over Minnesota Crookston, and two weeks after initially setting the program record with 74 points against U-Mary. The Mavericks — who last loss in the NSIC on Oct. 29, 2016 — are rolling.

4,079 — Career rushing yards for Notre Dame (OH)’s Jaleel McLaughlin, which set the MEC career record on Saturday. A quick reminder: the sophomore hasn’t even completed his second full season yet.

This week, we focus our attention on the players who performed well against top 25 teams, some of the 15 players we looked at earlier this week as players that should be on your radar and a few other student-athletes that caught our eye.

PREDICTIONS: 5 preseason predictions revisited at the halfway point of 2019

We’ve raved about Charleston (WV)’s dynamic duo of quarterback Brant Grisel and receiver Mike Strachan for several weeks, but it was a different duo that led to a big win on Saturday. Running backs Tyreik Mcallister — 253 yards rushing, 56 yards receiving, and three touchdowns — and Joe Street — 119 yards rushing, 10 receiving and one touchdown — led the Golden Eagles to a 49-24 win over No. 5-regionally ranked West Virginia State. The Yellow Jackets quarterback Austin Hensley had a big day, passing for 362 yards and two touchdowns connecting with Isaiah Scott for 179 yards and one of those scores.

The Lindenwood passing attack was on display in its upset of UIndy. Cade Brister threw for 531 yards and had four total touchdowns. He spread the wealth: Najee Jackson led the way with 124 yards but was joined by Payton Rose — 121 yards and one touchdown — and Nash Sutherlin — 115 yards receiving, 46 yards rushing, and one touchdown — as a trio of players who crossed the century mark. All-American tight end Erik Henneman finished the day with 94 yards receiving.

Here’s who else caught our eye. We’re focusing on really big days as the season winds down.