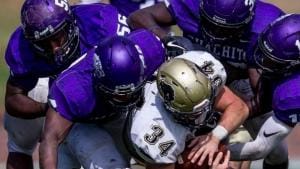 DII football showcase: How to watch, scores, and stats


FInally. The 2019 DII football season is here, and we waste little time getting into big matchups. Here’s how you can watch Harding and Ouachita Baptist, as well as Fort Hays State and Central Missouri, open the season in the first DII football showcase of 2019 .

Welcome to the 2019 DII football season.

OPENING WEEKEND: The essential guide to the top 25 — schedule, games and players to watch

Last season, Harding and Ouachita Baptist had the No. 1 and No. 2 scoring defenses in DII, respectively. That explains why the last time the two Great American Conference rivals met was a 7-3 victory in favor of Ouachita Baptist.

These schools are eerily similar. Both can play smashmouth defense, neither let people score, and both feature run-happy offenses. They are also evenly matched historically speaking. Over the past five seasons, Ouachita Baptist holds a 3-2 edge. The five games have been decided by an average of 3.8 points with the largest margin of victory coming in 2015 when OBU won 26-21.

This is a Game 1 with plenty of conference and NCAA DII tournament implications right from the opening kick.

There’s nothing like a little MIAA football to get the season rolling. Fort Hays State heads to Warrensburg to take on the Mules in a game that certainly matters in the conference standings right out of the gate.

On paper, the MIAA should be a tight three-team race between Fort Hays State, Northwest Missouri State, and Pittsburg State in 2019. But that’s why they play the game. Central Missouri is by no means an underdog, receiving 15 votes in the preseason poll. If the Mules want to play spoiler and make an early statement, they definitely have their opportunity on night one.

Injuries ravaged the Mules last year, and there will be some new faces on the offensive side of the ball. But Central Missouri always is a force at home, going 4-2 there last season averaging 43.3 points per game on its home turf. Scoring points is rarely a problem for the Mules, but the defense will have to tighten up to make a serious run in the MIAA, especially against Fort Hays State. If quarterback Brook Bolles — who was an NCAA.com player to watch that saw his injury cut short early by injury — bounces back, the Mules are a scary force.

There are a lot of familiar faces for the Tigers offense that scored just over 30 points per game last year. Chance Fuller filled in well when Jacob Mazara went down at quarterback and he’ll get his, well, chance, to run the offense as his own. The top targets from 2019 — Harley Hazlett and Layne Bieberle — are back as is his workhorse back Charles Tigner. Fort Hays State should be full steam ahead from the opening whistle.

Curious when the rest of the top 25 and those receiving votes play? Here is the schedule for opening weekend.