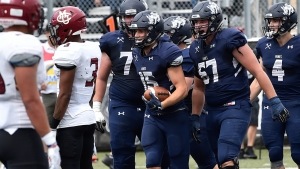 
After putting up some of the lowest scoring numbers of the year, a bit of normalcy returned to the DII football top 25 in Week 7. Eleven top 25 teams scored 40 or more points, four better than Week 6, as quarterbacks and wide receivers connected for big numbers through the air.

Let’s take our weekly look beyond the box scores and break down this week’s best numbers.

Shutouts in the top 25, but both weren’t on the winning side. No. 19 Kutztown shutout Lock Haven in a dominating 41-0 victory. Southeastern Oklahoma State delivered the first shutout of a top 25 opponent in 2018 as the Savage Storm blanked No. 15 Southern Arkansas 21-0.

Upsets in the top 25. That term is used very loosely this week, however, as these games were evenly matched. No. 3 Ferris State defeated No. 2 Grand Valley State to gain control of the Great Lakes Intercollegiate Athletic Conference 35-31. No. 16 Tarleton State has officially arrived in 2018, defeating the reigning champs, No. 7 Texas A&M-Commerce in a commanding 47-21 victory. Southeastern shutout No. 15 Southern Arkansas 21-0. Fort Hays State, who just spent its first week out of the top 25 all season, upended No. 18 Pittsburg State 50-21.

Games in a row Valdosta State has scored 50 or more points. The Blazers waited until the final seconds when the defense sacked Florida Tech’s quarterback, forcing the fumble that Aaron Dawson took 88-yards to the house for the 51-21 win. The Blazers have now scored 338 points in the last six weeks after a Week 1 performance in which they scored a season-low 45.

Career touchdowns scored by Colorado School of Mines wide receiver Brody Oliver Saturday. No. 51 was the Rocky Mountain Athletic Conference career record, as Oliver continued to set the bar higher and higher with each score. Oliver’s teammate, running back Cameron Mayberry, became the Mines all-time leading rusher in the same game. The redshirt-junior will continue to add to that record while he chases some more.

Here is a position by position breakdown of this weekend’s standout performers in the top 25.

Here are a few other schools and players to keep your eye on.

South Dakota School of Mines Connor Silveria stole the headlines by breaking the DII football single-game rushing record with 425 yards. He scored three first-quarter touchdowns in leading the Hardrockers to a 56-42 victory over Adams State. For the second week in a row, Grizzlies wide receiver Chad Hovasse reeled in four touchdowns, bringing his total to 15 on the season.

Gabriel Watson of Sioux Falls had another Gabriel Watson week. He has yet to rush for less than 126 yards in any of his seven games this season after going for 161 yards and a touchdown this week. He’s now at 1,197 yards and 16 touchdowns on the season.

Quarterback Roland Rivers kept the Slippery Rock momentum rolling after last week’s upset of then-No. 14 Indiana (Pa.). Rivers threw for 403 yards and five touchdowns while adding 82 yards and a touchdown on the ground. The Rock is now 6-1 and making a serious case for postseason considerations.

FB: Have a day Roland Rivers, 5 passing touchdowns, one TD on the ground and 403 passing yards. Here’s his latest touchdown toss to Henry Litwin. pic.twitter.com/wNhoFk1ivj

Go ahead and give Livingstone football a pat on the back. It is the only defense to figure out how to keep Virginia Union’s Tabyus Taylor out of the end zone. Taylor had another monster week, rushing for 177 yards and four touchdowns and has now scored three or more touchdowns in four of his six games played this season. Kudos to Chowan’s  Tyrell Freeman who totaled 239 yards and two touchdowns in the loss to VUU.

Add another win to the Hillsdale Chargers run to the postseason. The Chargers had another big week to stay at 5-0 in the Great Midwest Athletic Conference. Wide receiver Trey Brock had a big day with 157 yards and two touchdowns. That Nov. 3 matchup with undefeated Tiffin is looking more and more fun each week.

Augustana (SD)’s quarterback Kyle Saddler had his second 400-yard passing day in 2018. He threw for 460 yards and five touchdowns in the Vikings victory over Northern State.

MORE: The championship heads to Texas | Most DII titles