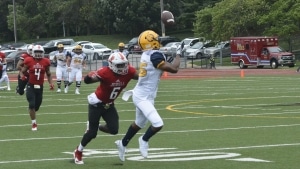 
Another week rolls by in DII football. That means another weekly dose of upsets that led to a shake up in the latest AFCA Top 25.

This week saw four upsets in the top 25, all coming from unranked opponents. Two of those upsets came in the top 10, so there was plenty of movement in this week’s poll. Let’s go beyond the rankings and break down this week’s top 25.

Three weeks in and the Texas A&M-Commerce Lions are still the top team in DII football. That’s five straight weeks in the No. 1 spot dating back to last season’s championship run. In fact, there wasn’t much change at the very top of the of the poll this week. The top seven teams all remained the same, dominating their opponents by a combined score of 332-86.

It’s tough to pick out the biggest threat to the Lions at No. 1 right now. No. 3 Indiana (Pa) has a dynamic offense, while freshman quarterback Braden Wright has No. 4 Northwest Missouri State looking like those Bearcats that went on the championship run not so long ago. Throw in No. 6 Ferris State that has utterly dominated its opponents thus far, outscoring its foes 161-40 (and that includes a 46-point victory against a top 20 team), and the top seven teams in DII football are separated by the slightest of margins.

New to the party

There were four big upsets this weekend from unranked teams. Two of those teams were able to break the top 25 in a big way.

Valdosta State has been putting on a show all season. The Blazers put their skills on full display at the national level, dropping 55 points on Fort Valley State in the DII football showcase. This past weekend, the Blazers went on the road to No. 8 West Alabama and played their most complete game of the season. Quarterback Rogan Wells had a monster game, while the defense took two interceptions to the house in a commanding 58-24 victory. They were rewarded for their efforts, making their 2018 debut all the way up at No. 16.

MORE: Here’s what you should know about Colorado Mines football

Colorado School of Mines went from receiving votes to landing right behind Valdosta State at No. 17. The Orediggers hosted the top rushing offense in DII in No. 9 Colorado State-Pueblo and answered the call on both sides of the ball, limiting the ThunderWolves rushing attack to 112 yards. Paired with one of the most prolific offenses in any conference, the Orediggers now have a big leg up in the tough Rocky Mountain Athletic Conference.

Welcome Azusa Pacific into the mix. The Cougars are out to a 3-0 start in 2018. Quarterback Tyrone Williams, Jr. had himself a day this past Saturday, throwing for 316 yards and three touchdowns while adding 37 yards and another touchdown with his legs. Of course, it’s a lot easier when Weston Carr is on the receiving end of his passes. Carr, one of NCAA.com’s 2018 impact players, reeled off 153 yards and all three of Williams, Jr.’s touchdown passes last weekend.

Pittsburg State continues its climb to the top. The Gorillas defeated Northeastern State 45-7 this past weekend, moving to 3-0 and jumping eight spots to No. 15 this week. That makes PSU the biggest riser in this week’s poll.

West Alabama fell the furthest, dropping 14 spots to No. 23 while Colorado State-Pueblo was right behind them falling 13 spots to No. 22.

This week the top 25 is pretty evenly represented amongst 10 conferences. The Mid-America Intercollegiate Athletics Association (No. 4 Northwest Missouri State, No. 15 Pittsburg State, No. 18 Fort Hays State, and No. 19 (tie) Central Missouri) and the Gulf South Conference (No. 8 West Georgia, No. 10 West Florida, No. 16 Valdosta State, and No. 23 West Alabama) lead the way with four teams apiece. The top 10 is still dominated by three conferences, as the Lone Star Conference, Great Lakes Intercollegiate Athletic Conference and GSC each send two teams each.

Winona State, who left the top 25 in a heartbreaker of an upset falling to Upper Iowa 34-33, is receiving the most votes this week. The Warriors, however, are in a prime position to jump back into the mix. They’re playing No. 2 Minnesota State this coming weekend. With a top 25 victory under their belt already, an upset on Saturday would be big for the Warriors.

Sioux Falls fell out of the top 25 this week after a win, but the Cougars’ Week 2 loss to Winona State hurt them this week. They have a very tricky Augustana (SD) team that took Minnesota State to the wire on the bill this week. It would be a huge victory for the Cougars.

Though the Great Midwest Athletic Conference has no teams currently in the top 25, it’s shaping up to be an exciting conference. Ohio Dominican, Findlay, and Hillsdale all received votes this week, and that doesn’t even include an undefeated Tiffin team in the G-MAC. It’s certainly becoming a conference to watch.