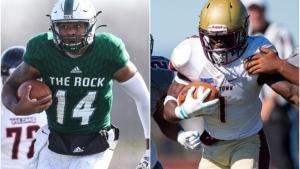 
Slippery Rock and Kutztown will battle in the 2019 Pennsylvania State Athletic Conference championship game on Saturday with DII football championship bracket implications on the line. Here’s everything you need to know about the big matchup.

Kickoff is scheduled for 12:05 p.m. ET from Andre Reed Stadium in Kutztown, Penn., on Saturday, Nov. 16. Be sure to check back right here Saturday morning as we’ll be bringing you score updates, stats, and big-plays as they happen from pre-game to the final whistle.

DII UNDEFEATEDS: Track the teams looking to go perfect in 2019

Both teams are 10-0 for the first time in program history, making them two of the 11 remaining undefeated teams in DII football. Both teams are nationally ranked as well with Slippery Rock at No. 8 and Kutztown sitting at No. 13 in the latest AFCA poll. It gets even tighter in the Super Region One rankings: Kutztown is No. 1 and Slippery Rock is No. 2. The No. 1 seed and a first-round bye in the DII football championship could rest on the outcome of the PSAC championship game.

SELECTION SHOW: How to watch and what to know for Saturday

Slippery Rock vs. Kutztown: By the numbers

There should be plenty of offense in this one. Slippery Rock is led by one of the best quarterbacks in DII football. Roland Rivers III is fifth in DII in passing with 3,107 yards, but he’s equally dangerous on the ground, leading the team in rushing and a total of 42 touchdowns. He has a dangerous duo at receiver in Henry Litwin (963 yards, 14 touchdowns) and Jermaine Wynn, Jr (919 yards, 10 touchdowns) who could both be over 1,000 by the end of Saturday.

The Golden Bears quarterback Collin DiGalbo didn’t play last weekend but has still has had a stellar season with 24 touchdowns through the air and nine more on the ground. Abdul-Hassan Neblett has been a difference-maker on the ground with 798 yards rushing and nine touchdowns this year but has been hot of late with 389 yards and six touchdowns the last three weeks.

Chad Kuhn leads the charge on defense with a Slippery Rock-best 10.5 sacks for the second-best sack attack in the conference. Shawn Turber-Ortiz, Nick Palmer and Ahkee Cox-Cowan have 11 combined interceptions for Kutztown’s pass defense and hope to be a menace to Rivers on Saturday.

It’s close but Slippery Rock has the ever-so-slight edge. Rivers III took over at quarterback in Week 3 of last season and The Rock hasn’t lost a regular-season game in the PSAC since. He led the No. 7-seeded team in Super Region One to back-to-back upsets in the DII football championship, and nearly led The Rock to an upset over No. 1 and undefeated Notre Dame (OH), losing 21-17.

The only thing Slippery Rock doesn’t have over that run is a PSAC championship. The Rock lost to West Chester 33-10 in last year’s rendition and I just think that motivates them to eliminate the errors and lock down a victory on Saturday. But Kutztown is too good to make this a runaway. It could very well come down to which team has the ball last.