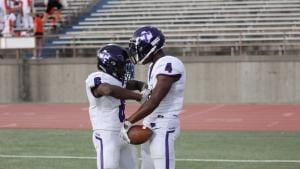 DII football: Here are the players that went off and filled the box scores in Week 4


Week 4 of the DII football season saw a lot of points scored and even more yards thrown up on the ground and in the air. The top 25 alone piled up 824 points, an average of 33.0 points per game. Let’s take a look at the best stats from the top 25 and a few outside the DII football rankings that made us pay close attention.

WEEK 4 IN REVIEW: Schedule, results from the top 25

Four weeks into the season, and it seems we know some of the names we’ll see. Roland Rivers III eclipsed the 300-yard mark for the fourth straight week and has yet to throw an interception. Jaleel McLaughlin piled up his third-straight 200-yard week and Zimari Manning had a record performance for Tarleton State pulling in 257 yards receiving.

Before we get into the individual stars of the week, let’s breakdown the top 25.

0 — Total shutouts in Week 4. After the top 25 posted five shutouts over the past two weeks, there was nary a team that could keep the opponent off the board. We told you it was a high-scoring week.

3 — Top 25 teams that lost in Week 4, the same as the previous week. No. 11 Texas A&M-Commerce had the unfortunate task of traveling to Pueblo, Colorado to take on CSU-Pueblo one week after its 15-game home winning streak was snapped. The No. 20-ranked ThunderWolves rebounded for the 24-17 win. Both No. 15 Midwestern State and No. 25 Saginaw Valley State lost to teams outside the top 25.

28 — Consecutive wins in the Northern Sun Intercollegiate Conference by Minnesota State. The Mavericks last loss in the NSIC was Oct. 29, 2016.

110 — Passes attempted by Slippery Rock’s Roland Rivers III through four games without throwing an interception. Per the official DII record book, the record for a single-season is 113 attempts without an interception, set by Jeff Allen of New Hampshire in 1975. Rivers III has completed an insane 75 percent of those passes with 19 touchdowns through the air already.

246 — Yards rushing Devante Turner and Koby Wilkerson combined for Central Missouri. Brook Bolles had been leading the charge at quarterback, but the Mules showed they were no one-trick ponies this past weekend. Turner had 138 yards and four touchdowns while Wilkerson had 108 yards and two touchdowns, combining for 65 percent of the Mules 55-point day.

Gannon and Clarion combined for 1,024 yards and 86 points, so you can guess there were some big numbers here. Gannon quarterback Jimmy Keefe threw for 374 yards and five touchdowns, while his favorite target Joey Cox pulled in 113 of those yards and two of those touchdowns. Clarion saw receiver Terrell Ford pull in 152 yards and a touchdown, while back Mylique McGriff ran for 146 and a touchdown. The key to the game for the Knights was the four interceptions put up by their defense.

This will be the normal slot for Tyson Bagent until further notice. Shepherd’s quarterback stayed red-hot, throwing for 385 yards and three touchdowns. Dylan Brewer was the primary beneficiary, reeling in 146 yards and a touchdown.

Preseason All-American wide receiver Craig Rucker got off to a slow start by his standards. The Mars Hill receiver is back in true form, posting his second huge week in a row, this time going for 161 yards and two touchdowns against Lenoir-Rhyne’s outstanding secondary.

Albany State also had a three-headed monster in the backfield on Saturday. Matavion Brooks led the way with 123 yards and a touchdown while Marcuis Fulks added 107 yards and a touchdown. Though he didn’t eclipse the century mark, Tracy Scott led the backs with two scores while adding 91 yards on the ground.

Here’s who else stood out from outside the DII football top 25.

There are a lot of box scores. Did we miss someone in the top 25 or elsewhere that had a monster day? Let us know by sending us a note NCAASupport@turner.com.