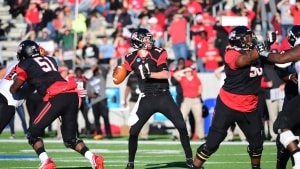 Valdosta State entered the game with DII football’s top scoring offense, scoring 52.2 points per game. The Blazers certainly delivered with their potent attack. After missing a field goal on their opening drive, the Blazers reeled off seven-straight touchdowns on their next seven drives before punting for the first time with 9:05 left in the fourth quarter.

Speaking of trick plays, Ferris State opened things up on its very first play of the game. A double-pass saw receiver Jevon Shaw toss it to Keyondre Craig for an 80-yard catch and run to the end zone, the longest in championship game history. On the very next drive, the Bulldogs made history yet again as Jackson Dieterle connected on a 52-yard field goal, breaking the previous record of 50 set in 1984.

Here are some more of the intriguing numbers and records from the 2018 DII football championship game:

The teams exchanged blows to the final whistle. An interception by Alex Brown in the third quarter put the Blazers ahead by two scores and helped them hang on despite Ferris State hanging around by scoring on one of the wildest plays in DII championship game lore.

Records were broken, stat sheets were filled, and Valdosta State and Ferris State combined in one of the highest scoring games in championship game history. At the end of the day, the Blazers walked away the 2018 DII football national champions, winning their fourth championship since 2004.

MORE: Programs with the most DII titles | DII football news

Be sure to scroll down in the blog below for all the championship game highlights.