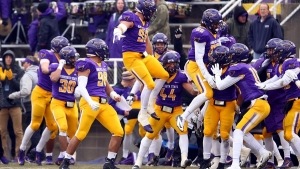 The national semifinals will be set by the time the final whistle blows. In order to get there, these five questions will have to be answered.

The Super Region One final pits two of the best running backs in DII football against each other. Notre Dame (OH) rode its freshman stud running back Jaleel McLaughlin to the greatest season in program history. McLaughlin exploded onto the scene, cracking off 302 yards in his DII debut and rolled all year, recently setting the single-season rushing yards mark for a freshman. Wes Hills transferred into Slippery Rock and got off to a slow start. He’s eclipsed 167 yards in five of the past six weeks, including three 200-yard games in a row and 12 touchdowns over that span.

In NDC’s first ever playoff win last week, Jaleel McLaughlin broke the NCAA DII record for most rushing yards by a freshman in one season! His 2,074 yards passes @JoiqueBell’s mark of 2,065 that was set in 2006. #TakeFlight #D2FB pic.twitter.com/WUmSsFxFS0

Here’s the thing. Slippery Rock’s defense allows just 95.0 yards rushing per game at a stingy 3.0 yards per carry. Notre Dame (OH)? The Falcons are even better allowing just 62.6 yards per game at a minuscule 1.9 per carry. Whichever running back can control the ground game will put its team in the position to be the biggest surprise in the semifinals next week.

Which undefeated teams will remain?

Of the eight teams left, six are undefeated. With the depth and balance across DII football this season, that is simply remarkable. Super Region Three and Super Region Four have a showdown of perfect teams, so we know for certain that there will be at least two fewer undefeated teams in the semifinals.

MORE: Lessons learned from Round 2 | The best stats and numbers from the second round

The Ferris State vs. Ouachita Baptist Super Regional Three showdown is very intriguing. On one side, Ouachita Baptist has one of the toughest defenses to figure out in DII football, allowing a division-best 9.4 points per game in 2018. On the other side, Ferris State has been one of the most explosive offenses in DII, putting up 496 yards per game. The Bulldogs star quarterback Jayru Campbell was out last week, and this team still put up 608 yards on coach Rich Wright’s notorious Northwest Missouri State defense. With quarterback Brayden Brazeal heading a deep rushing attack for Ouachita, the Tigers are amongst the best at controlling the clock and creating scoring opportunities. It will be interesting to see which style prevails in the quarterfinals.

Super Region Four has Minnesota State and Tarleton squaring off. The Mavericks are no strangers to playoff football, entering the 2017 DII Football Championship undefeated as well. The Texans? Not so much.

Texan Nation…we have touched down in Minneapolis, Minnesota! Let’s show them how we do things down south! pic.twitter.com/isQXtQyDns

Last week, Tarleton was able to hold off the defending champion Texas A&M-Commerce’s late fourth-quarter surge and advance to its first quarterfinals in program history. This will be another game featuring premier DII running backs going head-to-head. The Texans’ Xavier Turner has been an absolute beast all season, piling up 1,391 yards and an impressive 22 touchdowns. Nate Gunn has been a staple atop the rushing leaders in DII football, and it was more of the same in his junior season, as he ran for 1,295 yards and 20 touchdowns. This game may rest on which quarterback — Tarleton’s Ben Holmes or Minnesota State’s tandem of Ryan Schlicthe and JD Ekowa — can make the big pass play.

How many points can Valdosta State score against Lenoir-Rhyne?

Unstoppable. That’s the best word to describe Kerwin Bell’s Blazers’ offense in 2018. This is a team that hasn’t scored less than 44 points all season and led DII football by scoring 53.5 points per game. Last week, Bowie State looked to have Valdosta State on the ropes, jumping out to an early 10-0 lead and entering the half down just five after holding the offense to just two touchdowns. Bowie State would not score again as the Blazers reeled off 45 unanswered points in the second half. This team can score, and it can score fast.

Quarterback Rogan Wells is a Harlon Hill finalist for just reason, throwing for 2,383 yards and 30 touchdowns while adding 10 more touchdowns with his dynamic running abilities. It’s hard to hone in on his favorite weapon because Wells has thrown a touchdown pass to 11 different receivers this season, with eight of those receivers having more than one touchdown. Lenoir-Rhyne is coming off its toughest test of the season, barely edging out conference rival Wingate 21-17 in the second round. It doesn’t get any easier for the Bears, but if they pull through, they know their defense can hang with anyone left in the tournament.

Are there any upsets lurking in the quarterfinals?

Round 1 saw seven lower seeds advance in an exciting, and very surprising, opening to the DII Football Championship. Last week, with the No. 1 seeds back in action after their bye week, it was a bit more predictable, as only one lower seed, No. 7 Slippery Rock, continued its run in the postseason.

That means all four No. 1 seeds are hosting their respective Super Regional finals on Saturday. Which of those four is most prone to upset?

FB: And while we’re talking about offense… how about the bounce back performance from QB1 today? Roland Rivers III looked a bit off the last two weeks. Today? How about 18-of-24 for 249 yards with 4 TD, no INT. pic.twitter.com/3KGrgW1X75

There is no reason to believe that Slippery Rock can’t move on against Notre Dame (OH). That’s not to say the Falcons will roll over by any means as they are as tough a No. 1 seed as any left in the mix. These are two very evenly matched football teams. We’ve discussed the running backs, but Falcons quarterback Chris Brimm and Slippery Rock’s quarterback Roland Rivers III both add an extra element that makes these two offenses potent. Notre Dame (OH) fought through one of its toughest games of the season, but moved on, holding off Hillsdale in the final seconds of the second round. Slippery Rock’s bruising offense may not be so kind. This should be a good one and is as hard to pick a winner as any game remaining on the bracket, giving this one some upset allure.

So, who moves on to the semifinals?

Before the tournament began, we shared our bracket and the projected winner of each region. Three of the four teams — Minnesota State, Ferris State, and Valdosta State — are still alive, and there is no reason to go back on our predictions now. That leaves that tricky Super Region One to choose from. Last season there were two surprising teams in the championship game, as No. 6-seeded West Florida faced No. 5-seeded Texas A&M-Commerce for the title. The tournament always seems to have that element of surprise in the semifinals and that’s why we’re picking Slippery Rock to keep The Rock rolling.

MORE: The championship heads to Texas | Most DII titles