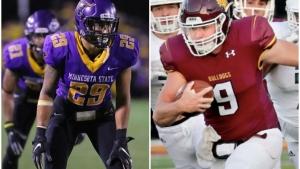 
The DII football Week 5 schedule has a pair of top-25 matchups between undefeated teams. No. 3 Minnesota State takes on No. 12 Minnesota Duluth in the DII football showcase and No. 4 Tarleton State puts its ten-game home winning streak on the line against No. 23 Angelo State.

DII FOOTBALL RANKINGS: What we know about the top 25 after one month of 2019

Here’s where you can find the complete top-25 rankings, schedule, top games and links to watch the DII football showcase.

DII football: The complete Week 5 schedule for the top 25

Both teams are off to 1-3 starts but there should be plenty to watch in this Great Lakes Valley Conference showdown. Lions quarterback Cade Brister leads the top passing offense in the GLVC against McKendree’s top passing defense, so something will have to give. Lindenwood has perhaps the best tight end in DII football in Erik Henneman.

But don’t sell McKendree’s offense short. Quarterback Turner Pullen is coming off a huge week in which he threw for 344 yards and five touchdowns, three of which went to Matt Cole. These are the bottom two scoring defenses in the GLVC so we should be in for a high-scoring game with all the firepower on offense.

This could be the marquee matchup of the weekend. Minnesota State puts its 28-game conference winning streak on the line against its rival Minnesota Duluth. The Bulldogs lead the all-time series 20-17-1, but the Mavericks have won the last four.

This is a battle between two of DII football’s best individual players. The Mavericks’ running back Nate Gunn — who along with wide receiver Shane Zylstra, went over 200 yards in the last meeting with the Bulldogs —and the Bulldogs quarterback John Larson, who leads Minnesota Duluth in passing and rushing yards. Minnesota Duluth scores 40.5 per game — best in the NSIC —and Minnesota State allows just 9.8 points per game, also the best in the NSIC. This should be another back-and-forth battle.

The Texans — who are tied with Valdosta State and Notre Dame (OH) for the longest home winning streaks in DII football — welcome Angelo State to Stephenville, Texas in a battle of the last two overall undefeated teams in the Lone Star Conference. Angelo State is new to the top 25, entering the mix after knocking off then-No. 15 Midwestern State 28-6 last weekend. Tarleton State’s offense has been one of the most exciting to watch all season. This should have a playoff atmosphere to it with huge ramifications in the LSC.

Ashland at No. 9 Grand Valley State

The Lakers have certainly made it exciting so far in 2019. They’ve used fourth-quarter comebacks to win two games, including walking away winners in the final seconds last weekend. This week they welcome long-time GLIAC rivals Ashland. The Eagles began the season in the top 25 and will be looking to show the nation they still belong with an upset on the road.

No. 2 Ferris State at Davenport

The No. 2 team in DII football heads to Davenport to face a Panthers team that is currently undefeated. This could be the upset watch of the week.

The list for player-of-the-year candidates is really starting to take shape. A couple of players are on record-setting paces and others are putting up career-best seasons. Here’s just a few you should watch, but be sure to check back at NCAA.com every Sunday for a rundown of the best statistical performances from the weekend.