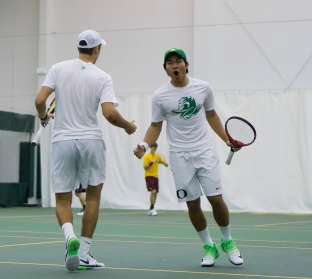 
NORMAN, Okla. – The Oregon men’s tennis team earned the program’s first-ever NCAA Tournament win, taking down No. 23 Tulsa, 4-1, Friday afternoon at the Headington Family Tennis Center. The Ducks will play their second round match tomorrow at 11 a.m. PT against Oklahoma.

HOW IT HAPPENED: Oregon (19-7) started off strong, picking up the doubles point for the 21st time this year. Forty-second ranked duo Jayson Amos and Armando Soemarno dropped the opening game to Or Ram-Harel/Francois Kellerman, but it was all Oregon after that as the duo won five straight to take a 5-1 lead. The Tulsa pair was able to grab a game to make it 5-2, but the Ducks closed it out, winning 6-2 and moving themselves to 17-3 on the year.

Daan Maasland and Simon Stevens clinched the point with their win over Dylan McCloskey and Dominic Bechard. Trailing the Hurricane pair, 2-1, Maasland and Stevens turned it on, winning three straight to take a 4-2 lead. Tulsa cut the lead to one at 4-3, but the Duck duo shut the door, winning 6-3 for their team-high 23rd victory of the year.

In singles, Tulsa (17-14) was able to tie the match up at 1-all with a straight set win in the top spot. The tie was short-lived as Ethan Young-Smith put Oregon out in front with his 6-4, 6-3 victory over Okkie Kellerman at No. 6.

Cormac Clissold extended the Ducks’ lead when he took down Francois Kellerman on court five. Clissold won the first set in a tie break and then jumped out a 5-0 lead in the second. Kellerman rallied, winning four straight games to cut Clissold’s lead to 5-4. However, the sophomore finished out the set, winning 6-4 to put UO up 3-1 in the match.

In a battle of freshmen at No. 3, it was Thomas Laurent who came out on top and clinched the win for Oregon. He and Majed Kilani went back and forth and after being tied at 4-all in the first set, Laurent won back-to-back games to take it 6-4. Kilani then jumped out to a 5-2 lead in the second set before Laurent rallied and won five straight to take it 7-5.

In the unfinished matches, Jayson Amos was leading 3-1 in the third set over Carlos Bautista at No. 4. Amos fell into a 4-0 deficit in the first set before winning six straight games to take it 6-4. Bautista then jumped out to a 3-0 lead in the second set and was able to hold off Amos, winning 6-3 to force the deciding set.

At No. 2, Simon Stevens dropped the opening set to Matias Gonzalez on a tie break. The two continued to battle in the second set and Stevens was up 4-2 in the tie break when Gonzalez was penalized, awarding Stevens the breaker. The sophomore had just won the opening game of the third set when the match was called.

“I felt that these guys came here to win and they did just that. The preparation was awesome and it paid off as it was an unbelievable match. This was a good time to play our best match of the year.”

MAKING HISTORY: The historic season for this year’s squad continues as they become the first team to advance past the NCAA Tournament first round. The Ducks were 0-4 previously in NCAA matches with the 2014 team being the only team to have scored a point. This year’s team already set a new record when they were ranked as high as No. 20 in the ITA rankings and with 19 wins, they tie the 1990-91 team for the fourth-most wins in a single season.