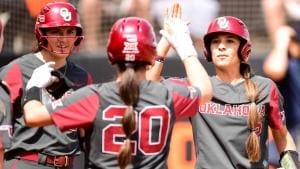 
The latest NFCA coaches poll was released on Tuesday after another wild weekend in college softball. Let’s take a look at the poll itself before we get to three takeaways from the latest rankings:

The Sooners capped off an historic season by becoming the first Big 12 team to go undefeated during conference play in back-to-back seasons.

With 1⃣6⃣ accolades this year, the #Sooners have set a Big 12 record for most weekly honors by one team in a season! #ChampionshipMindset pic.twitter.com/TBBvfVxKx9

Oklahoma has now won 38 straight games — tied for the second-longest streak in DI records. They finished the regular season at 48-2, which is the best mark in program history. Their last loss came on Feb. 22 against UCLA. So yeah, it’s pretty understandable why the Sooners were the unanimous No. 1 selection.

“They just impress me beyond belief,” coach Patty Gasso said. “They haven’t felt a loss in a while, and they don’t want to. I think that motivates them as well. I can’t tell you how proud of I am of this team and their accomplishments, how much joy it is to watch them play. It really has been a wonderful journey. Watching them accomplish things, it’s like a proud mom… It never gets old.”

Washington hasn’t been as dominant throughout the season as UCLA, but there’s no question as to who has the momentum now. This weekend, while UCLA went 2-1 against an unranked Stanford on the road, the Huskies swept No. 4 Arizona. That puts Washington at 12-4 against ranked teams this year, with three of those losses coming to UCLA.

No, YOU try getting a hit against @Tarannnn_14 😳

She racked up 18 strikeouts, 2 wins, 1 save and a 0.57 ERA to claim her 6th career #Pac12SB Pitcher of the Week award for @UWSoftball! 🥎 https://t.co/O27yrIeKuA pic.twitter.com/oSrl1BLMLD

Washington still has a home series against Stanford starting Thursday before the regular season is over, while UCLA hosts Arizona to close out their season, so don’t be surprised if these two trade places once more.

The Bulldogs might not boast as impressive a resume as the other two teams in this breakdown, and while they have been on fire lately — winning 26 of their last 27 games — the overall performance isn’t what stands out for this team.

Instead, Drake can claim one of the most impressive individual feats this season, thanks to the performance of pitcher Nicole Newman. Newman just won the MVC Pitcher of the Week for the eighth-straight week. That award was definitely well-deserved, seeing as the redshirt senior pitched her fourth perfect game of the season. You read that correctly. Four perfect games. In one season.

Behind her 4️⃣ perfect game of the season, Nicole Newman wins her 8️⃣ straight @MVCsports Pitcher of the Week award! 👀🙌🏻
📰 https://t.co/UvWQbGAV2t