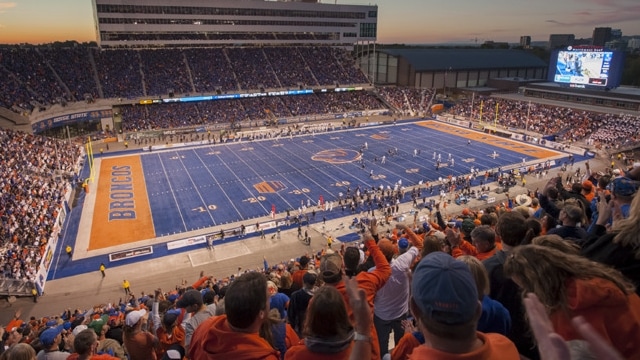 
Every college football program has a unique set of traditions that sets it apart from any other team when it takes the field. In some cases, it’s the field itself that separates it from the competition.

Six teams across Division I and II football have ditched the traditional green grass to opt for more colorful home turf. Here are the most unique and eye-catching playing fields in college football:

“The Blue” was the first blue AstroTurf field in the world.

Is there any other program besides Boise State that comes to mind first when thinking about non-green football fields?

The Broncos were the first to start the colorful trend in 1986 and have long been the most recognizable behind its past decades of success on the iconic field known as “The Blue.”

While Albertsons Stadium was first opened in 1970, it debuted its blue turf 16 years later to become the first blue Astro Turf field in the world. The turf has since been updated two times, with the last renovation coming in 2002.

It’s always interesting to see the Broncos play on their home blue turf in their traditional blue uniforms, which serve as camouflage from afar. In fact, Boise State was almost banned from wearing all-blue jerseys at home due to the possible confusion. But the Broncos used their insistence on wearing blue as a bargaining chip for agreeing to stay in the Mountain West.

Boise State was the founding father of oddly colored football fields and has the trademark rights to back it up. Any university’s football program, no matter the division or even the country, must be given legal approval by Boise State before implementing a non-green playing field.

That’s what you call setting a precedent.

New Haven’s blue and yellow field was opened in 2009 when the football program returned.

More than two decades after Boise State’s unveiling of “The Blue,” Division II’s New Haven started the next wave of unique field colors with its own blue and yellow turf after an agreement with the Broncos in 2009.

The field made its debut the same year the Chargers returned to football after the program’s six-year absence. While Boise State and New Haven used different turf companies, it is the same blue look from goal line to goal line. New Haven’s secondary color of gold is represented in the painted end zones.

The turf change was one of the first renovations made in New Haven’s return to the gridiron. The Sprinturf replaced natural grass, and the whole project was backed by UNH alumnus Ralph F. DellaCamera Jr. The field was renamed in his honor after previously going by Robert B. Dodds Stadium.

For a while, Boise State remained the lone uniquely colored field across college football. But New Haven’s 2009 unveiling started a domino effect of other programs testing out a wide variety of shades on the color wheel.

Eastern Washington went with a different primary color for its new field in 2010, revealing its red turf that has since been dubbed “The Inferno.”

The Eagles also switched to Sprinturf and debuted their red field with black end zones to an abundance of positive fan feedback.

The renovation not only saved the university some money in terms of field maintenance, but the uniqueness has helped the Eagles’ brand as one of the few universities to break the mold of typical fields. That was immediately evident in the program’s home opener on its new turf, where it drew a school-record-breaking attendance of 11,702 fans.

Like Boise State, Eastern Washington also likes to blend into its surroundings wearing home reds on its red field.

There’s a lot of historic nicknames for stadiums around the nation, but “The Inferno” has to be up there among the most intimidating.

OK, so we’ve seen blue and red. Now how about a mix of purple and gray stripes?

That’s the innovation that Central Arkansas introduced in 2011.

Alternating every five yards, Estes Stadium’s artificial turf is colored with those two accents before reaching its black end zones.

MORE: When does the 2018 college football season start? | Heisman watch

Seeing what Boise State and Eastern Washington did in past years and all the success that came from their switches, Central Arkansas wanted to add its own twist to field colors and reek similar benefits in terms of turf’s advantages over grass, as well as the colors’ effects on fan support and even recruitment.

The color scheme isn’t as vibrant as its blue or red counterparts, but the alternating stripes were definitely a new concept.

“The Factory” symbolizes the blue collar ideals of the region around EMU.

The next field isn’t quite as eye-popping as the others. In fact, when watching an Eastern Michigan home game from home, you may think for a second you are watching the game on an old-time black-and-white TV.

The Eagles play on an all-gray surface, outside of its green midfield logo and end zones, using the company FieldTurf. It was debuted in 2014 to mixed reactions.

While some see the field as bland and unappealing, it has also drawn rave reviews since its opening.

Eagles head coach Chris Creighton was one of the first to call the field “The Factory,” which has become its nickname as a representation of the team and the region’s blue-collar attitude and toughness.

Critics can disagree on the field’s color appeal, but the symbolism behind the gray surface is a nice touch.

Brooks Stadium was the latest colored turf field to emerge in 2015.

The newest of these creative turfs debuted in 2015 when Coastal Carolina showed off its “Surf Turf.”

The Chanticleers kept it simple with an all-teal turf, representing the school’s primary color.

“When the decision to install an artificial turf field was made, it only made sense that the turf be teal,” Coastal Carolina interim director of athletics Matt Hogue said in a 2015 press release. “In addition to our winning tradition, we are known nationally for our distinctive color scheme. And it’s not just the color our teams wear, but a campus-wide identity. We felt this would be a great opportunity to further build that brand.”

The field is used for football and women’s lacrosse, which makes the turf advantageous in terms of hosting both programs. And the teal color is definitely a new look that’s easy on the eyes.

So what’s next for football fields? Will more programs transition toward these unique turf looks? And which colors and patterns will we see next?

It’ll be an interesting trend to keep an eye on.