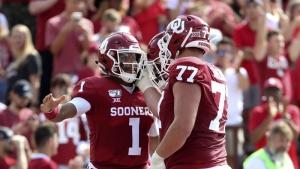 
It’s October, but it doesn’t get much better than this. Week 7 of the 2019 college football season offers a great slate of games that matters for rankings positioning (and bragging rights). Check out our preview below, including top games, what to watch out for and the Top 25 rankings.

There are four games between ranked teams, with No. 6 Oklahoma vs. No. 11 Texas and No. 5 LSU vs. No. 7 Florida sharing top billing.

Don’t forget to watch this Wednesday night. The Sun Belt’s two best teams meet in a cross-division meeting. Appalachian State might see itself as a darkhorse New Year’s Six contender from the Group of Five, but the Ragin’ Cajuns have been lethal on offense. Louisiana averages 540 yards per game, with 314 on the ground — and 7.3 yards per rushing attempt.

No, this hasn’t been the turnaround season as hoped for in Miami. But if the Hurricanes (0-2 in the ACC) can upset the Cavaliers (2-0 ACC), that would throw the Coastal Division race wide open. But Miami will have to be better with the football, as it had five turnovers in a 7-point loss to Virginia Tech last week.

Like the above Sun Belt game, here’s a sneakily good matchup that might not get the attention it deserves. The AAC has a handful of teams thinking this is their season to win the conference now that UCF looks vulnerable. Even if Memphis wins, the Tigers still have to play vs. Tulane, vs. SMU, at Houston and vs. Cincinnati.

The FCS has two top-10 games this weekend. JMU opened at No. 2 and has remained there, though the Dukes needed overtime to beat Stony Brook last week. Villanova has had a different story, as the Wildcats started unranked but have climbed into the top 10 thanks to wins against Colgate, Towson and Maine.

A&M plays the No. 1 team in the country for the second time this season. The first one didn’t end well, as the Aggies lost 24-10 at Clemson. Texas A&M gets a visit from the top-ranked Tide, but it hasn’t shown much this season to expect an upset win. Alabama might have looked leaky on rush defense, but QB Tua Tagovailoa has 1,718 passing yards and 23 touchdowns without an interception.

UNDEFEATED TRACKER: Looking at the remaining unbeaten teams this season

The Tigers play without the No. 1 ranking for the first time this season. They’ve won four in a row against the Seminoles, who are 3-2 and on a little two-game winning streak as they head to Death Valley. Much attention will be on Clemson QB Trevor Lawrence, who has thrown five interceptions this year.

Notre Dame escaped Los Angeles last year to secure a College Football Playoff spot. The Irish might need some help to make it back to the CFP this year, so style points could matter here. Notre Dame has only one more game against a team that’s currently ranked: Michigan on Oct. 26.

Iowa has spoiled an undefeated Penn State season before, notably on a game-winning field goal to end the 2008 game. But in the last visit to Kinnick Stadium, Trace McSorley threw a 7-yard touchdown pass to Juwan Johnson on the final play of the 2017 game.

OK, Florida. You beat then-No. 7 Auburn. Now try to beat No. 5 LSU — and in the craziness that is a night game at Tiger Stadium. It’s going to be LOUD. LSU QB Joe Burrow will likely be tougher to stop than Auburn’s Bo Nix, so a Gators win here could (should?) lead to some No. 1 votes for Florida.

Boise State is the Group of Five favorite to make the New Year’s Six, but a loss would open up the door wider for the AAC. Hawai’i has already defeated Arizona (who’s now 4-1) and Oregon State, but this would be an even bigger win. The Broncos have won six in a row in the series and have yet to lose on the Blue Turf to the Rainbow Warriors.

College football Week 7 preview: What to watch out for, big questions

Is Penn State or Wisconsin the top challenger to Ohio State?

Ohio State is tied for third in the AP Poll and is getting more votes for No. 1 as it destroys opponents each week. The Buckeyes are also seen as the obvious Big Ten leader.

The best news? Ohio State plays both this season in Columbus: Wisconsin on Oct. 26 and Penn State on Nov. 23. But we’ll know more about where the Badgers and Nittany Lions stand this weekend, as each has a tough game (Wisconsin is home against Michigan State and Penn State is at Iowa).

It’s also possible Ohio State will have to play Wisconsin twice, should the two make the Big Ten Championship Game.

Texas A&M started the season ranked No. 12 with hopes of challenging for the CFP. But the Aggies’ schedule always looked like a hurdle too steep to jump over again and again:

Wow. That’s already two different No. 1-ranked teams, with an outside chance at more if UGA or LSU make a run toward the top. But that brutal schedule gives Jimbo Fisher and his team three more chances to possibly ruin somebody’s season.

The AAC might have the most interesting conference race

When a conference has three ranked teams and not one is the preseason favorite (UCF), you know it’s been a wild start to the season.

UCF has won the American in each of the past two seasons, though the Knights needed 2OT to beat Memphis in 2017 and a comeback from down 17 to beat the Tigers again in 2018. There’s a very real chance the 2019 AAC title game is between two 10-2 teams (or maybe even better). The question is, which of the realistic contenders of Cincinnati, Memphis, Navy, SMU, Temple, Tulane and UCF get there?

Oh, what a knight!

Take a look back at the biggest plays from Cincinnati’s thrilling victory over #18 UCF in sold-out Nippert Stadium.#Bearcats pic.twitter.com/J6OqXo3H55